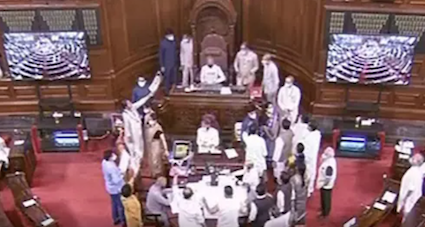 Rajya Sabha Chairman M Venkaiah Naidu suspended six Trinamool Congress (TMC) MPs from the Rajya Sabha after creating an uproar in the morning over the Pegasus spying issue. They have been asked to withdraw from the House for the rest of the day.

Six TMC MPs- Dola Sen, Md. Nadimul Haque, Abir Ranjan Biswas, Shanta Chhetri, Arpita Ghosh and Mausam Noor had entered the well of the House and displayed placards, disobeyed the Chair, and had a grossly disorderd conduct in the House.

Chairman Naidu first requested the protesting MPs to return to their seats and threatened to invoke rule 255 against those holding placards in the well. As the members continued the protest, he ordered them to leave the house.

Later a Parliamentary Bulletin mentioned that “members of the Rajya Sabha who entered the well of the Hosue displayed placards, disobeyed the Chair and whose conduct was grossly disorderly in the House this morning (August 4, 2021) have been directed to withdraw immediately from the Council under rule 255 by the Chairman,”

It must be noted that the “ruckus” was pre-planned as Trinamool MP Derek O’Brien had already tweeted that opposition MPs will protest at 2 pm. “Two pm in Rajya Sabha. Today. Come watch the entire Opposition unite against the Modi-Shah dictatorship.”

Opposition is not allowing parliament to function since the beginning of the monsoon session. Both Lok Sabha and Rajya Sabha have failed to transact any significant business, except the passage of some bills due to the continued protests.

Yesterday Prime Minister Narendra Modi also slammed the opposition, saying repeated adjournments forced by the opposition were “an insult to the constitution… to democracy and to the public”.