A Sikh girl in Kashmir Valley: Where are you on the two sides of divide? 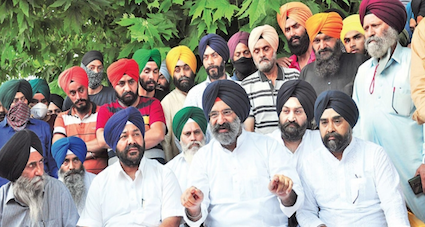 Let’s say there are two sides to divide on a recent Sikh girl’s marriage to a Muslim in the Kashmir Valley. Let’s define them as individual freedom vs conversion agenda. (We would keep politics out for the moment).

Here are those worried on conversion for you:

Ah, precedents! That historical wolf which keeps feeding on lambs who are under the mistaken belief that the forest belongs to all.

We remember Kashmiri Pandits, we remember forceful marriages in our neighbouring Islamic countries, we recall the painful memory of The Partition.

History calls us inside its antechambers to show how Islam has spread at the cost of indigenous faiths in other countries, overtaking those nations in due course. And that it could justify military campaigns in the name of Allah to its followers to convert or cull the Kaffirs. Sure, that’s true for Christianity too, the other Abrahamic religion, who on its one-God concept cleared America of its Red Indians; and consumed the lives of eight lakh Tutsis in Rwanda more recently.

There is no harm if as a parent I take my daughter to this library of history; make her aware that it’s a one-way street and Pew has only today found out that 80% Muslims don’t like their women to be married outside Islam; and that my girl’s love could come at the cost of repudiation of her entire past, her entire separation with her own people; and that her well-meaning beau might not be able to resist his clan of conservatives.

The present controversy sure has a heavy dose of politics. Those who fear for breach in Muslims-Sikhs Unity have some goal in mind. Why you need this Unity? Against whom? What grouse Sikhs could have against the Hindus? And how is it promoting amity with Hindus? How do you think Sikhs would vote if there was a referendum on India or Khalistan? It could be a goal of a few not of majority. What’s wrong if I conclude it’s an agenda, and deep pockets of secessionists, those who want to carve India out into enclaves, which is feeding such militants and media?

And how do you think a Hindu should reflect when a Yograj Singh says from a platform:“Hindu ladkiya takae takae mein bikti hain (Hindu girls are sold on pennies).” Or when a Hindu knows how a conversion gang, with millions of illegal foreign funds, has been in the business of adding converts from Delhi to Assam. How is he supposed to reconcile with the silence of Liberals and Media; or of advocates of ganga-jamuni tehzeb; or those who swear in the name of India’s integrity. Would a father be wrong if asks her girl to take off the lenses of love and look at the evidence in plain sight.

Now that Manjinder Singh Sirsa is being doubted in taking up the Sikh girl’s case, how many are reflecting that the entire Sikh history has been a fight against conversion. Their gurus laid their lives but never converted to Islam. Sikhs are extremely sensitive to conversion. Extremely sensitive. Let’s not bury this fact in trying to find the needle of politics in the haystack of historicity.

And how about India’s Constitution? Those who cite Article 25, which allows citizens to propagate  their religion, would never tell you that at the time of its introduction, it was conveyed to the Constitutent assembly  by Congress leader KM Munshi, that the religious leaders of Islam and Christianity had assured him there would be no forced conversion of others. There were many voices in the constituent assembly—Rohini Choudhary, Lok Nath Mishra etc—who were not sure if this freedom to propagate religion wouldn’t turn out to be a covert mean of conversion. Even Sardar Patel was of the view that such conversions should be declared illegal and viewed a crime.

Love is truth but it’s also blind. Those who are protective, would surely be worried. It’s not patriarchy. Facts though are cast in stone. Islam and Christianity rely heavily on conversion, willing or forced, and pointing it out is no Islamophobia. That societies and nations have changed its course irrevocably is no Islamophobia. That being alert to such an agenda is no Islamophobia. And certainly not sharing your apprehension with your girl. If she still goes ahead, best of luck. Even Love-Jihad laws don’t stop her from her choice. Ignoring the statutory warning is entirely her wish.