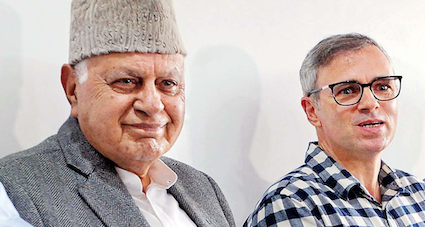 On June 24, Prime Minister Narendra Modi convened a meeting of all parties of Jammu and Kashmir in Delhi where he talked of delimitation, elections and then grant of statehood back to the Union Territory (UT). Just 10 days later, Delimitation Commission headed by retired Supreme Court judge Ranjana Desai toured both Kashmir, and Jammu, regions of the UT in that order, meeting dozens of delegations.

The provincial units of NC of Farooq Abdullah and his son Omar Abdullah gave different memoranda to Desai & Co in Srinagar and in Jammu. That seemed truly like the party was adhering to the dictum “Do in Rome as the Romans do’’. In Kashmir, it spoke the language of the Kashmiris, trying to capture the essence of the sentiment prevailing among the masses. In Jammu, its party unit headed by Devender Singh Rana spoke in a language that was more in consonance with the BJP!

The memorandum submitted by the Jammu NC unit said: Any delimitation process has a vital role in empowering each constituent to be equal shareholder in the process of democracy so that each one feels empowered and not feels relegated, isolated, disconnected or disempowered. It further said that it expected the commission to work transparently to delimit constituencies on the basis of basic tenets of Delimitation – population, geography, topography, area, physical features, contiguity, convenience  of administrative units and facilities of communication and approachability of public convenience.”

If further said: All regions or sub-regions crave for equal role in the governance where no one should nurture a feeling of subservience or discrimination. The memo also said: There are geographical and topographical challenges in the Jammu region and certain areas are far flung, inaccessible, remote, backward and mountainous.

Talking about the Scheduled Caste and Scheduled Tribe (ST) communities, the memorandum said: The Scheduled Tribes of the region must get adequate judicious representation, adding reservation should be based on the settled criterion. One must say all that sounds pretty convincing and to the point too. If only one scratched a little deeper, this would truly look like running with hares and hunting with hounds and a duplicity no less.

The DoubleSpeak of Abdullahs

What about reservation in spheres other than political for the STs? From 1947 to 1991, when the state was ruled by NC in several spells, it used Gujjars and Bakerwals as a captive vote bank, but did not give any reservations to them. This was the reason why a Gujjar scholar Dr Javed Rahi, said: Gujjars and Bakerwals are not against Article 370. Article 370 is against them. Incidentally, there are more than 10 lakh STs in J&K and they did not shed any tears when Article 35-A was scrapped and they got political reservations as mandated in Articles 330 to 342 of the Indian Constitution.

Giving political reservation in the new legislative assembly is one of the tasks that has been assigned to the Delimitation Commission. Nowhere till date has the NC admitted that it was responsible for denying STs their due so far. It has also not admitted that it is the reason for carving out legislative assembly constituencies inequitably in the two regions of the UT. Circumstances have now forced it to admit tacitly that the people in Jammu region feel Kashmir-centric politics has been their bane. A couple of days ago, Farooq Abdullah said candidly that the aspirations of the people of the two regions are distinctly different from one another.

Well, for a beginning, the names of terrorist organisations like Hizbul Mujahideen, Lashkar e Toiba, Jaish e Mohammad, The Resistance Front etc are too well known as terrorist groups mostly operating in Kashmir. Please read about various Indian Army formations like JAKLI, JAKRIF and Dogra Regiments, to name a few, to just understand the aspirations of Jammu youths. Mostly rooted in the Jammu region and that is not to say that other elements of the Indian Army, besides the Indian Air Force, Navy, BSF, CISF and others do not attract the youth of Jammu in hordes.