Accountable to only Constitution, says CJI: But not to citizens? 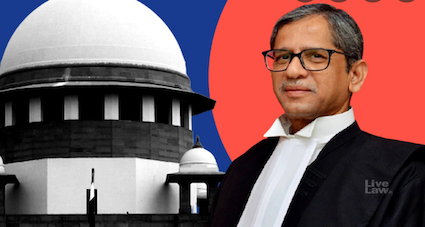 (First it was Bibek Debroy and Aditya Sinha from the Economic Advisory Council to the PM who raised the question of why Indian judges are mostly shy of declaring their public assets. Now it is Krishnamurthy Subramanian, once the Chief Economic Adviser of GoI, merely two days later, questioning the CJI on his “judiciary-is-answerable-to-the-Constitution-alone” statement. It kind of validates NewsBred’s conjecture that India’s Executive is finally questioning if it’s time India’s judiciary is accountable too. Subramanian’s piece in today’s Times of India is below- NewsBred)

This month, after 26 long years, the judicial system delivered a verdict on a simple case of politician Raj Babbar assaulting a police officer in 1996. Meanwhile, the Chief Justice of India underlined that the judiciary is answerable to the Constitution and the Constitution alone. This column is about what these two events together mean.

The motto of the Indian Supreme Court is Yato Dharma Statho Jaya (Dharma can be upheld only if privilege and responsibility go hand-in-hand; higher the privilege, greater the responsibility. Economists describe this concept as “no free lunch in society.”

(a) With 4.5 crore cases pending, is the judiciary fulfilling its dharma, when justice is getting delayed, and thereby denied to crores of citizens?

(b) Shamefully, India is in the bottom 15th percentile of all nations in ease of enforcement of contracts

( c) Clearly justice is getting delayed and thereby denied to far more Indians than citizens in 160-odd countries.

As the judicial system has total independence, and dharma unambiguously implies that higher the independence, greater the accountability, the conclusion is pure and simple: The buck must stop with the judges.

They must take unambiguous responsibility to carry all the relevant stakeholders with them. Blaming politicians, the government, or us citizens for expecting far, far more from themselves does not cut any ice.

Every CJI should acknowledge clearly in public that the judicial system owes timely justice to the citizens of this country, a dharma that cannot be fulfilled by pointing out every other stakeholder’s lacunae while not showing the mirror to his/her colleagues.

Why do I not pick bones on other parameters where India is in the bottom 15th percentile?

(a) Because the ease of enforcement of contracts is most fundamental to any civil society;

(b) It has widespread effects on our economy and society, from attracting corporate investments to fostering innovation and entrepreneurship, to enabling grater competition in the economy and virtue in society by eliminating Mastaya Nyaya, where big fish eat small ones.

Why has the Constitution been created? To provide the framework that enables governance in such a manner that the welfare of the citizen is enhanced. That the judiciary’s allegiance is only to the Constitution is undeniably correct in word. However the spirit—as I understand in the context of the judicial system—is enshrined in the Preamble, where the very first endeavour is stated as “to secure to all its citizens JUSTICE, social, economic and political.”

Every CJI should lay out a time bound plan to eliminate the Himalayan backlong—a plan that includes how to utilise technology, how to separate routine cases that can be dealt with quickly using technology from the complicated ones that cannot rely on technology, how to work with the governemnt.

As we all have only 24 hours in a day, our priorities determine how much impact we create through our actions. If as the chief economic adviser to GoI, I had spent my time worrying about popular matters like the stat eof Indian cricket or firecrackers or Diwali, of course my attention would have reduced on the economic matters.

What happens when we prioritize popular topics over more pressing matters? Can cricket or firecrackers during Diwali, for example, substitute for the challenges that a common person faces when all he/she keeps getting is “tareeq pe tareeq, tareeq pe tareeq.” NO. Given the current predicament, the judicial system should focus exclusively on its primary functin, until the Hiamalayan-sized backlog of cases is cleared.

For India to grow 7.8% annually, I t needs to be at least among the top 50 nations in ease of enforcement of contracts. Given the total independence we citizens have provided to the judiciary, every CJI should evolve a time-bound plan for India’s judicial system to be ranked in the top quartile of nations, not the shameful rank in the bottom 15th percentile.

(This article is reproduced with gratitude to Times of India)

The Islamic organization Popular Front of India (PFI) had planned to eliminate all BJP and RSS leaders and have one of its own member...