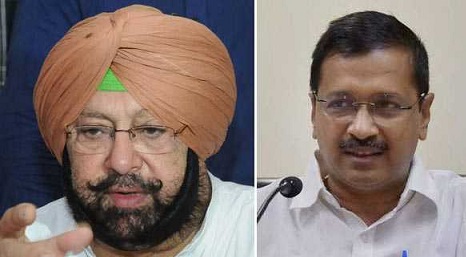 While speaking to the media on Friday, Singh remarked that Aam Aadmi Party (AAP) kept on changing its stance on agrarian legislation. “This shows Kejriwal and AAP have a different face for the people, with totally contrarian intentions hidden inside,” he said.

Singh termed both the AAP and the Shiromani Akali Dal a “bunch of hypocrites whose double standards on the farm laws had exposed their lack of commitment to the farmers”.

“The AAP and Akali Dal MLAs never say what they mean, and vice versa,”

Singh alleged that both the parties had extended support when the Punjab government passed bills in the Assembly to negate the Centre’s farm laws, but later changed their tune to “suit” their political interests.

Earlier also, Punjab CM labelled Kejriwal a “coward” and said he would even “sell his soul” if it served his purpose.

On December 15 he tweeted “Every Punjabi knows I am not one to be cowed down by any amount of false cases… they also know you will sell your soul if it serves your purpose. The whole world has seen how you sold off farmers’ interests by notifying one of the black laws. Why did you do that?”

“What pressure did the center have on you? Or is it so you can go groveling back to them again the next time your pathetic government is floundering to handle the Covid crisis?” he added further

Soon enough, Kejriwal hit back at Singh, remarking that the farm laws were “his (Amarinder Singh) gift to the nation”

“U were part of the committee which drafted these Bills. These Bills are YOUR “gift” to the nation. Captain sahib, why do BJP leaders never accuse u of double standards the way they accuse all other leaders?” the Delhi chief minister had tweeted.