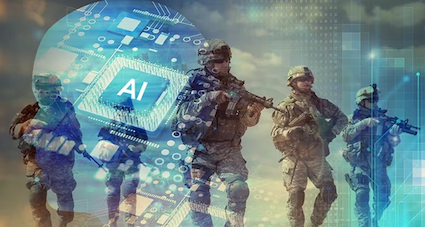 (Rajiv Malhotra is iconic in Indic studies, in countering the forces working against our civilization. Yet, his initial foray was into computer science and here, while presenting his book Artificial Intelligence and the Future of Power: Five Battlegrounds in a talk for Think India Foundation, he presents a scary picture of India’s unreadiness in the world being fast overtaken by Artificial Intelligence. The transcription done by Bhumika Arora is heavily edited.)

Certain things started happening five years ago that troubled me. I quietly began investigating and these things have a huge impact on the world, United States and everywhere else but especially India because of its large population, under-employment, under-education and a lot of fragmentation, infighting. Most of all, India lost the lead to China. India is no longer the superpower in software, it has ceded that lead to China, and in Artificial Intelligence (AI).

In fact, if you look at the statistics, India is not in the top 10 in the world in terms of investments in AI, in terms of patents. A lot of Indians in their personal capacity are at the top of aI but they’re working for the American companies. When I talk about artificial intelligence, it’s not only the limited thing technically. I’m talking about augmented reality, the neuroscience, interventions by AI, drones, robotic soldiers that are driven by AI facial recognition, speech and hand-writing recognition.

I’m talking about the hacking of your mind through social media. I’m talking about the spiritual dimensions. I’m looking at a whole lot of technologies, quantum computing actually. Today the US and China are in a race for quantum computing; whosoever builds the first quantum model, breaks all security codes, will be able to hack all the encryption, all the passwords instantly. With one click, you’ll get into any network: So imagine all your electricity grid, defence grid all of that completely hacked. Imagine a missile is coming at you and you are able to hack into its encryption and make it U-turn and go back where it came from and blow up. Imagine the danger that would happen to the entire missile network of a country. That’s the kind of catastrophe that quantum computing will bring.

Now the US had a clear lead in quantum computing but China did some big borrow-steal, you know. A large part of the US trade war with China has to do with AI, with the US military understanding that China has gotten an advantage.

China has drones robotic soldiers. I don’t know whether China has started deploying AI on the border yet but it certainly will. It is developing drones which are going to be able to go under the radar. You could shoot a person or drop weapons quietly in the middle of the night for terrorists to pick up. All this technology it would export to Pakistan. The Pakistan-China axis is very dangerous and I don’t think many people recognize it enough.

I recently read that Indian and US Navy detected 12 driverless or unmanned Chinese submarines in the Indian Ocean and that these are very slow, they don’t look like normal submarines, they’re like a glider and they’re gathering data without being visible. So if they want to attack, they know what’s where, who’s where, what the trade routes are, where Indian ships are parked, where the submarines are parked. I’m told very soon they will have a hundred, or in next few years a thousand gliders in the Indian Ocean. They could count the number of ships, tanks, the speed at which they are moving. You can count the number of soldiers. So with satellite imagery, or with underwater imagery, you could keep track of very minor details of what the other side is doing. This is the next frontier for terrorists.

Imagine a little drone with a little camera and one bullet whom it could shoot. It goes into a cricket stadium or a public gathering. With facial recognition it could shoot him so now what do you do? So mass producing these on a scale unprecedented is going to happen and China has a lead on this.

The US is planning a lakh drone air force. They are fighter jets without human pilots. They are collapsible, so they could collapse into a suitcase and a pilot could eject these pilotless drones out of his plane. They can distract the enemy, can shoot the enemy, divert the radars, they could do all sort of things.

Imagine a Himalayan War. There are robots which are better than humans at potholes in winter. They don’t need food, they’re disposable. The US has been working on driverless vehicles in Iraq, Iran and Afghanistan. And testing them to detect bombs, defuse them so a human being is not put to danger. They also have driverless tanks and trucks. So this business of AI and its impact is so huge. It’s as fundamental as the industrial revolution in Britain which created the whole new world system. And the US and China are at the forefront of this.

It’s going to make today’s military obsolete. It will be like somebody with bows and arrows facing an army of tanks. I am concerned that the US and China are also colonial powers.

Battleground one is economics. It has to do with jobs, with education in India. How did India lose its software lead? Is undoing going to do the same with AI? When you go to international conferences, you will find the largest contingent of AI experts and papers come from China. Its very saddening there were many other Indians but they were working for Microsoft or Google or Facebook. So India has turned into supplying labour, the lead India had in software was lost.

When you look at China’s educational policies, the universal education which India still doesn’t have or practical education. When you meet a Chinese, his parents are well-educated, his grand-parents are well educated. Most of them are third-generation educated people. This is not true of Indians. So the investments they made were long term and it’s paying off.

China invested multi-billion dollar funding in so many technologies. Today they are number one in solar power; they have more robots than anybody else does. There are so many leading edge technologies; semi-conductors etc. AI is a cluster of technologies.

There is a PWC report which projects that by 2030, 16 trillion dollars of the new economy will be created and they are predicting the largest chunk of this will go to China, almost half. Next will be the US. Between them, 75-80 per cent of the whole market share of the AI is gone. And then there is EU, other countries like Japan, Russia, Israel and India. All this combined is 2-3 percent and India is a part of it. So we are nowhere close. This technology is going to be the game-changer and we haven’t woken up.

A lot of my books, like Breaking India and Being Different were ground-breaking; they were considered pioneers because they shook up people. They argued things that people were not thinking of at that time. This new book of mine shows that all those public intellectuals, who are in literary festivals, big shots on social media, with their own channels, (but) as far as AI is concerned, they’re obsolote. They have zero knowledge. I tell them that as many as 500 million Indians at the lower end of the social-economic status are going to be obsolete as far as being able to get a job. This is very serious.

Big corporate people would get richer but 90% of Indian workers don’t work for big corporate India. They don’t work for the Sensex companies. Most of them are small-sized or self-employed independent. India needs to wake up. It needs to shake up its leaders.

AI is a tremendous force for good like industrial revolution, was like nuclear energy so many things are; and it’s also a tremendous force that will result in inequalities because the benefits will not be equally shared. Some people will get more benefits than others. There will be a new colonization, there will be new disempowered people, haves and have-nots, a new caste system because of huge masses of humanity becoming disempowered.