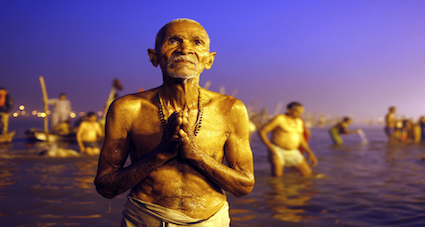 (This is a distilled transcription of Tarek Fateh, a known critic of Islamism, speaking on Jaipur Dialogues, with Sanjay Dixit. The full dialogue could be heard here.)

Tarek Fateh: Who is afraid of Hindu? Nobody is afraid of Hindu. Rather Hindus are afraid of themselves They are always cautious that by their actions, by any chance, they could reveal they are Hindus. They have not understood Hinduism and no Hindu has ever tried to explain it to them. They are busy doing MBAs while the other side is busy spreading propaganda.

Marxists always have this upper-class ideology. They are born millionaires—not in financial terms but with ideology. For them, Hinduism is archaic, redundant and a burden on human society. Islam, on the other hand, is revolutionary and anti-American. So if it is anti-American, it must be pro-worker, pro-proletariat and that’s why they are soft on Sharia.

The theories of Communists didn’t come directly from Russia. First it was communicated to Communist Party of Great Britain (CPGP). Then CPGP used to ask its comrades to follow the instructions in India. Why on earth did they support the Partition of India? This was the reason. The comrades got their instructions from the leaders sitting in Britain.

In India, until actually you prove that you have been part of revolution, or you are associated with Communist ideology, nobody could get a membership of Communists. Who are Leftists now? Will you call Javed Akhtar a Leftist? I am just stating an example.

Sanjay Dixit: In India we have made a category of Paanch-Makkars: Marxists, Missionaries, Mullahs, Macaulay-putras (Liberals) and Media.

Tarek Fateh: Hindus have an identity crisis. They are ashamed of being a Hindu. They have made Savarkar a villain in his own country. Till today, I cannot understand why he has been made a villain. How do you come to know your own identity? They are afraid that if they stand for anything, the world would say he is a Hindu extremists.

Sanjay Dixit: They are affected by the power of extremists. Whichever country has more extremist power, they favour them. Possibly, Hindus also need to have more extremist organization, then only HIndus would get their due respect.

Tarak Fateh: But why do you want to be extremist. Be Hindu first, that’s more than enough. I don’t think before Modi, India had a strong position on any global platform. Who would have ever thought that Ramayana would be taught in the schools of Saudi Arabia. Nobody outside India had any idea what Hinduism is.

India should be the world symbol of architecture. We love our statutes, our architecture. But we don’t showcase it. What kind of secularism are we preaching?

You know Chris Alexander, ambassador of Canada in Kabul, exposed how Pakistan’s army is embedded in the Taliban’s unit. But there is nothing coming out of India.

Sanjay Dixit: Recently our Prime minister in Aligarh Muslim Univeristy said that AMU was centre of Indian nationalism. I believe it was the centre, but not of the Indian movement rather of the Pakistan nationalist movement.

Tarek Fateh: You would be surprised to know that even after independence, till 1953, every AMU graduate was guaranteed a civil service job in Pakistan. So India paid for its education. And Pakistan got benefit from its output. Every Aligarh graduate was given a 400sq yard plot.