After Modi, It’s Shah’s turn to take Naidu to cleaners 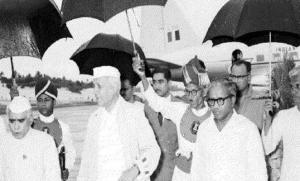 BJP president Amit Shah has launched a massive broadside against Andhra Pradesh chief minister Chandrababu Naidu with an open letter to people of the state, highlighting his Janus-faced traits, today.

“He has joined hands with the Congress which bifurcated the state…It’s the same Congress that dethroned N.T. Rama Rao in an undemocratic manner in 1984,” wrote Shah in a scathing open letter which highlighted the various projects which the Modi government has initiated in the last four and a half years for the state.

Shah pointed out that it was the same Naidu who had hailed the special package on the floor of the assembly on May 16, 2017 and arrested those who demanded Special Category Status for the state.

But then he made Special Category Status an issue for his state and broke ranks with the BJP.

“Shri Chandrababu Naidu has Congress blood in him. But we never expected that he will go to the extent of even surpassing the Congress in speaking lies and untruths,” hit out Shah.

The letter points out dozens of projects which has come AP’s way during Modi’s tenure, including the Polavaram irrigation project for which Rs 6764 crores have already been released by the Centre.

“Never in the history of independent India have so many projects been sanctioned in such a short span of time for a single state by the Centre,” wrote Shah.

Earlier on Sunday, PM Narendra Modi was at his blistering best against Naidu in a public rally in Guntur.

In response to Naidu claiming himself to be senior to Modi, the Prime Minister had said: “Naidu is senior in changing alliances; stabbing in the back his father-in-law (NTR); betraying people, misusing public money and amassing wealth—I admit his seniority in these factors.”

The Prime Minister alleged that Naidu had made huge money for his family in Amaravati and Polavaram projects which he would not be able to do. “I don’t take people’s money for my political advantage like Chandrababu Naidu is doing here,” Modi had said.

“The TDP leader wants me to go back. Yes I am going back to PMO after the elections to stay for one more term.”