After ‘offering’ a bouquet of arms to Talibans, US now suspends weapons sale 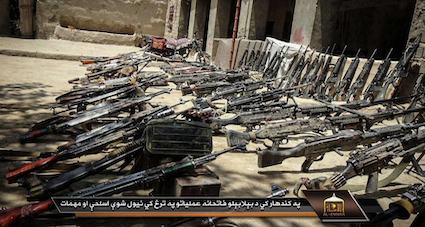 After fuelling the Talibans by leaving all the military tools, including weapons and combat aircraft, the Joe Biden-led United States administration has now restricted arms sales to Taliban-controlled Afghanistan.

In a notice to defence contractors, the US State Department’s political/military affairs bureau said pending or undelivered arms transfers to Afghanistan have been put under review for the time being.

The International Monetary Fund had also said that the new gove­rn­ment in Afghanistan is cut off from using fund reserve assets days before the nation was set to receive almost $500 million, depriv­ing the Taliban of key resources.

However, after these suspensions, the Taliban posted a video showcasing their military gains seized from Afghan forces. The captured equipment includes a variety of rifles, pistols & some expensive weapons. In addition to US-made M4 carbines and M16 rifles, there were also Black Hawk helicopters, drones, A-29 Super Tucano attack aircraft, and mine-resistant humvees. In another video, a member of the Islamic terrorist group is seen seizing US dollars.