After record buy, Yogi says to farmers: Keep bringing wheat for sale as long as you want 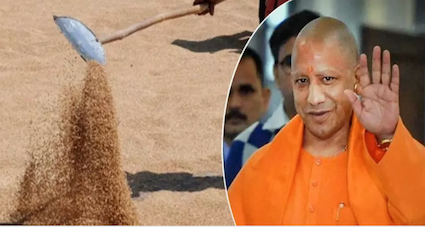 Another feather in Yogi Adityanath’s crown: The Uttar Pradesh government has broken its own record of procuring wheat this season by purchasing 53.80 lakh metric tonnes this season. According to reports it has benefitted more than 12.16 lakh farmers.

The previous best was 52.92 lakh metric tonnes of wheat procurement in the year 2018-2019 which now stands overtaken.

Interestingly, Yogi Adityanath has said that as long as farmers come to sell their produce, the state government is prepared to procure the wheat.

He has extended the wheat procurement for the current season till June 22.

The increased number of purchase centres, the increased MSP, no fixed time limit and transparency in procurement are some of the reasons that has fuelled the record purchase of wheat, Manish Chauhan, commissioner, Food and Supply, was quoted in a report.

“Despite the ongoing pandemic induced slowdown, we are still purchasing almost one lakh metric tonnes of wheat every day. On June 14, we bought 1.14 MT of wheats from the farmers,” Chauhan said.

Chauhan also revealed that it is the first time that farmers have received the benefits of Direct Benefit Transfer(DBT). The payment is directly credited into the bank accounts of farmers within 72 hours of purchase. In a bid to get rid of middlemen in wheat procurement, the state government has introduced the electronic point of purchase (e-PoP) machines ensuring transparency in the purchase of wheat.

“For the first time, the farmers have received direct benefits against the sale of their wheat crops without any delay and cuts under the ‘One Nation, One MSP, One DBT’,” Chauhan said.