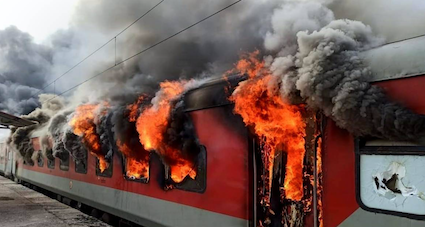 It would be quite hilarious if it was not tragic that media outlets who are joined at the hip in their agenda they call crusade, Indian Express and NDTV, are rarely nuanced if they could throw stones at Bharatiya Janata Party (BJP).

So while news is filtering in that the radical Campus Front of India (CFI) and political parties have played no small part in the violence on the Agnipath scheme, there is no such mention in these two media outlets, busy as they are in censuring the BJP for not “explaining enough” to the youth.

There isn’t a thought why empty trains have majorly been the target, as one is never conveyed why young kids with stones are pushed in front of law and order agencies. And that’s because the global media loves such images which show India in poor light. Their errand boys in India, you see, act as feeders to this agenda.

They won’t ponder why a minimum four-year job guarantee or Rs 10 lakhs is not enough; why a younger armed force, reduced burden on defence budget from salaries-pensions isn’t good for modernisation, why a sense of nationalism and respect for armed forces isn’t good for the country.

And then you have situations where India’s growth at 8.3% goes with the suffix “only”; a spectacular win at hustings is dumbed down either by hair-splitting on number of close wins or some 40% votes which didn’t go to them; where there is no shame on projecting apocalypse on Covid-19 and then later, even grudgingly not acknowledging how it was overcome; where all attempts are made to break India’s resolve on Russia-in-Ukraine etc.

So “success” is reported with a rider while protests are used to dock the BJP.  Lost in this undeviating pattern is their own reputation, the welfare of nation, and surrender to inimical forces as long as the groovy train keeps chugging.

It’s a completely different matter that eight years of this naked agenda hasn’t borne any fruit. Those protests in Western Capitals or in Westminister in London; the google celebrity they made out of Akhlaq, Pehlu, Rakesh Tikait etc; the Rafale riff, the allegiance they change when Nitish Kumar is out from when he is in with the BJP; or a similar flip-flop on Uddhav Thackeray; has made no difference to BJP’s fortunes in last eight years.

BJP has no reason to fix a bridge which isn’t broken but that’s not to say they themselves aren’t blinded by their success. They too are guilty of not looking beyond their nose, i.e. winning elections. The nation would’ve stood with them on CAA or in farmers’ protest or post-poll violence in Bengal or a genuine push for Kashmiri Pandits than riding a movie with an eye to election in J & K later this year. There doesn’t seem any plan to come to terms with anarchy on streets, unless and until the resultant polarization is good news from polls point of view.

Or CFI, and its parent body PFI, wouldn’t still be breathing now.

Judiciary, similarly, chooses its moments to be pro-active or indifferent: So their alacrity on Lakhimpur Kheri or Kanwariyas or bulldozers is almost in real time while it took a backseat on CAA and farmers protests and one has no idea where the Palghar lynching or Bengal riots are headed. Who knows they might respond to a PIL on Agnipath and send the project into review. With a high-powered committee, of course.

That leaves India, and majority of Indians, in a very bad space. Their lives and livelihoods are at mercy as is the territorial integrity of a nation, already severed in 1947. The uniformed are similarly dis-served.

India is drifting on the log in the turbulent sea. Powerful are perched on its top; the lesser we with their fingers out of the water, while otherwise submerged, in search of a straw we could clutch.