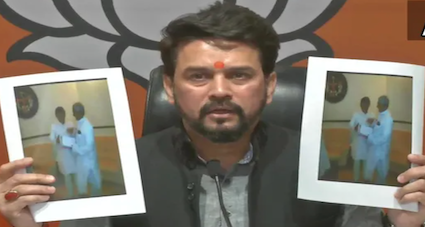 “Why is Akhilesh silent over this? These photos show him with Akhilesh Yadav when he was CM. Did Akhilesh Yadav call him over biryani? His son was the mastermind and involved in the blasts,” said Thakur.

Welcoming the judgment by the Court in the case, the BJP this had happened when Narendra Modi was the Chief Minister of Gujarat.

This statement from the saffron party comes after Uttar Pradesh Chief Minister Yogi Adityanath alleged that the father of a convict in the 2008 Ahmedabad serial blast case is campaigning for the Samajwadi Party in Assembly polls and alleged that Akhilesh Yadav’s party is protecting terrorists.

Calling the court’s verdict historic the UP CM claimed that of the 38 condemned to death one is from Sanjarpur in Azamgarh.

Addressing a public rally in Pilibhit, the Chief Minister said, “You can imagine… Nayi hawa hai, wahi SP hai, SP ka haath, aatankwadiyon ke saath (there’s a new wave, but the SP is the same; hands of the SP are with terrorists). This has been proven once again.”

The UP CM further said that no terrorist incident has taken place in the last five years because terrorists knew that they and those sheltering them will not be allowed to go scot-free.

A special court on Friday sentenced to death 38 members of terror outfit Indian Mujahideen in the 2008 serial blasts which killed 56 people and injured over 200.

Meanwhile, Jamiat Ulema-e-Hind President Maulana Arshad Madani today said that they will challenge the 2008 Ahmedabad serial blasts verdict of the special court in the High Court and if needed will approach the Supreme Court.