Al-Qaeda terrorists in UP: Akhilesh could have egg on face like he had in serial blasts of 2007 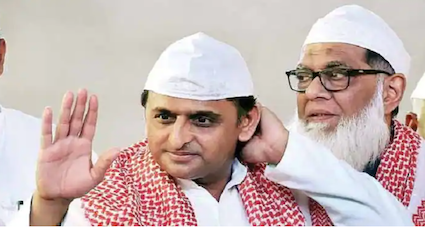 Anti-Terrorist Squad of Uttar Pradesh arrested two terrorists from an al-Qaeda affiliated network in Lucknow on Sunday. Search is on for other operatives. They had plans to execute bomb blasts and suicide attacks in various parts of Uttar Pradesh, particularly in Lucknow and more so around the Independence Day (August 15). Terror is still in the air.

But it hasn’t pleased two former chief ministers of the State, Akhilesh Yadav (Samajwadi Party) and Mayawati (Bahujan Samajwadi Party). Akhilesh said he didn’t trust UP Police. Maywati tweeted that “people” are questioning these arrests ahead of the assembly polls. This glibness apart, the two have no hesitation in entrusting their lives with the UP police on their security!

Akhilesh won’t feel happy to be reminded about the serial blasts which took place in the court premises of Lucknow, Faizabad and Varanasi within minutes of each other on November 23, 2007. Over a dozen died and many more were injured. Arrests were made.

Before the UP assembly polls in 2012, Akhilesh vowed that “innocents” incarcerating in prison would be freed. His poll-promise was to withdraw the terrorism charges against three locked up in jail. No sooner than he had won the polls and returned as chief minister, he sought the opinion of the law department to exonerate Khalid Mujahid, Tariq Qasmi and Sajjadur Rehman. It’s another matter that the Courts didn’t hear him. And a few years later, a couple of terrorists he had deemed “innocents” were awarded with life sentence.

Mayawati today finds the ATS arrests of al-Qaeda affiliates as suspicious. She as then chief minister must not have forgotten the attack on CRPF camp in Rampur in 2008 which killed seven Indian soldiers. She had then dubbed it a failure on the part of CRPF itself in failing to safeguard its men. Its another matter that a decade on, four of the accused—-Imran Shehzad, Mohammad Farukh, Sabauddin Saba and Mohammad Sharif—were awarded the death penalty.

Well, among the two who had escaped and were arrested later, one Ariz Khan has been awarded death penalty for the murder of Delhi Police inspector Mohan Chand Sharma in Batla House encounter case. This encounter had taken place after serial bomb blasts in the Capital which killed 39 people and left 159 injured. (The other one who had escaped arrest—Shahzad Ahmad—was later arrested from Lucknow in 2010).

These politicians move from one lie to another, without a sweat on the brow, without a pang of conscience, their souls sold to satan of power and greed. They do so in lust of Muslim votes who oblige them without a pause on the interest of nation or lives lost many of which could be their brethren too.

Lutyens Media of course would never question a Sonia or Mamata or Kejriwal or regional satraps such as Akhilesh Yadav and Mayawati. Or even judiciary which pontificates on anti-terror laws with the straightest of face. Our cops and soldiers not only put their lives on line but also leave their integrity and honesty in the hands of charlatans.

I say, shed a drop of tear on their fate.