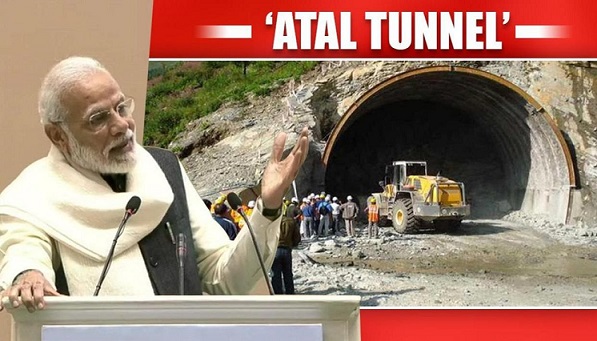 India is hoping for a game-changer in the standoff against China in Line of Actual Control (LAC) in Ladakh if the Rohtang Tunnel, as proposed, comes to fruition by September.

As the winter approaches the snow-capped yet bleak terrain in next three months, Indian Army would urgently need a logistical passage which could support its increased presence in the turbulent region.

At the moment, there are two routes which help Indian Army stock up its winter needs in Ladakh—one, Srinagar-Kargil-Leh passage via Jozila route and the other one from Manali through Rohtang Tunnel.

The sticky issue is, these two routes are only open during summer months. But if Rohtang tunnel becomes a reality, the Manali route remains open all year round and beefs up Indian Army’s preparations immensely. A similar urgency is being injected on Jozila tunnel for winter months and a statement by Union transport minister Nitin Gadkari on hastening the process is hugely welcomed.

Rohtang Tunnel, 8.8km long, will be the world’s longest above an altitude of 3,000 metres and will reduce the distance between Manali and Leh by 46 kms. It has been decided to name it “Atal Tunnel”, in the memory of India’s late prime minister Atal Bihari Vajpayee.

It’s worth remembering that even in summer months, maintaining the present level of troops and attending to their requirements, is a herculean effort. With China turning rogue, India just can’t afford to slip down the ladder.

China’s military aggression and threatening posture against India in Ladakh is not something new. It has been going around for years, rather decades, and constantly nibbling at borders is what it has been doing.

Its predatory tactics have yielded handsome results and China has gobbled up miles upon miles in remote regions. For almost a decade now, the thinking in the Indian army is that it needs to be halted in its tracks.

Meekly conceding more territory every summer was taken as fait accompli by our policy planners. Too many redlines were being crossed and it needed to be rebuffed which has now become a pressing matter.

The induction of armoured regiments, missile assets and deployment of heavier artillery in forward positions has been going on for many years now. The Galwan Valley fighting of June 15 which led to India losing 20 of its soldiers is a serious flashpoint.

This incident served as a rude wake-up call, if any was needed, and perhaps helped to dump Chinese sympathisers embedded within our systems. It has helped bring the Centre and armed forces on the same page like never before.

Earlier, even if the armed forces on ground were ready to confront the ever-advancing Chinese, the civilian hierarchy, top politicians, would advice caution. Backing off timidly was something most formations had to swallow as a bitter pill routinely.

The agreements signed with the Chinese on firing no bullets was and is a serious handicap. After June 15 happenings, we are dangerously close to turning LAC (Line of Control) with China into something very similar to LoC (Line of Control) with Pakistan. Of course, we see firing incidents all along the LoC routinely almost on a weekly basis, if not daily.

Recalling our lesson from the recent past, we saw that at Doklam, China had backed off only after a 73- day stand-off. Why should it be ready to disengage in Ladakh in lesser time than that?

Over the past few years, some armoured regiments, missile assets and additional fire-power stands deployed in Ladakh to deal with any possible escalation. The Galwan Valley incident only means more troops being rushed to Ladakh for acclimatization and their possible deployment in likely troubled spots.

For the coming winter, and perhaps many later, keeping additional troops in the reserve and rear positions in Ladakh is a natural corollary after the recent events. Frankly, there is hardly anything like restoration of status quo ante in the scenario that prevails on the Chinese borders. Eternal distrust is something China has earned through its treachery.

As such, China’s aggression towards India, towards its South East Asian neighbours and threats against Australia show its intentions very clearly. Others can decide what they can do to deal with it but we may have chosen our path already: Stout resistance.

For others named above, there may be some time to think and fine-tune their responses to China. We have no choice but go ahead and strengthen both our defensive and offensive capabilities in Ladakh.