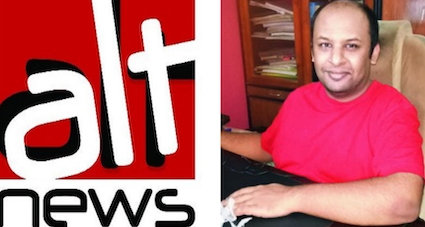 Pratik Sinha owned Alt News is known for its ‘fact-checking’ but in the garb of busting fake news, it’s rather peddler of the same.

Alt News is notorious for misleading the audience by whitewashing crimes of ‘Left scholars’ and pushing anti-Indian, anti-Hindu agenda.

In a recent series of lies, Alt News has allegedly lied about its funding. A Twitter user, Vijay Patel (@vijaygajera), sharing the funding documents, revealed how the website had asked for public donations even though it hasn’t given any information about the donations received in the last two years.

Alt News has been set up as a non-profit organization and gets individual donations ranging from Rs 9 to Rs 1,000. In July this year, through his Twitter profile, Pratik Sinha has again asked for donations of Rs 6 lakhs for their monthly expenses. However, the website’s annual report clearly shows that Alt News already has unused funds lying with them, more than their monthly requirement.

The Twitter user claimed that the company website under the transparency of funding section mentioned that they only received Rs 3 lakhs as fundings from Zindabad Trust, run by Arundhati Roy. The latter regularly speaks in a language that resonates with every element that Left-Liberals stand for.

Sinha didn’t reveal that he had also received a grant of Rs one crore from Independent And Public-Spirited Media Foundation (IPSMF) and ten lakhs from Infosys in 2018. The IPSMF also funds The Wire, known for its hardline stance against India, Prime Minister Narendra Modi, and Hindus.

Additionally, when someone asked about the grants from IPSMF, Pratik has again lied and mentioned that they received a token amount and that too only once; however, documents point out that AltNews has received a total of 1 core 84 lakhs in 2 grants of IPSMF.

The non-profit organization has been receiving donations in crores, but they haven’t paid a single rupee of tax for their huge income.

It is not the first time that the Alt news website is making headlines for spreading lies. Mohammad Zubair, one of the other co-founders of Alt News, has often lied to further his agenda. In May 2020, Zubair shared an unverified report exonerating the Tablighi Jamaat members from their involvement in spreading the coronavirus outbreak. However, the report was thoroughly refuted by Delhi Police later on.

He was also charged under POCSO after targeting a minor girl in his Twitter fight with a social media user.

In June this year, they had even filed a petition to continue their agenda of spreading misinformation, stating that they won’t comply with new IT laws and should be exempted from it as they’re fact-checkers, not publishers.

However, the court refused to grant a stay on any coercive action taken by the government for non-compliance.