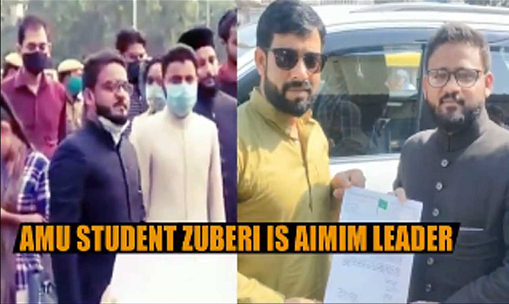 A shocking video has surfaced in which a Aligarh Muslim University student leader Farhan Zuberi could be heard justifying the beheading of individuals who dared to disrespect Prophet Muhammad.

Interestingly, the video is posted from his account only in which he was caught giving an open threat to behead while protesting.

Aligarh Muslim University students were protesting against the French President Emmanuel Macron for his remarks on Islamist terror. This was in the aftermath of beheading of a school teacher and then killing of three people in the city of Nice in France.

This was not all. Farhan was invited by the Times Now on a show as a guest and asked for his open call to behead who he feels have offended Islam. He could be heard saying: “Absolutely. How can someone dare to disrespect our Prophet? Why should anyone do this?”.

Zuberi is also leader of the All India Majlis-e-Itehad-ul-Muslieen or AIMIM, which is headed by Asaduddin Owaisi. As per Times Now, AIMIM has distanced itself from the remark of Zuberi.

Several political leaders have also reacted to the situation. Bhartiya Janata Party leader Manoj Tiwari criticized Farhan’s remark and said people like him not only give open threats but also cross their boundaries.

Minister of State for Health and Family Welfare, Ashwini Choubey launched an attack on opposition for favouring such religious extremists for petty political gains.

“The anti-Indians who have been defending, terrorists, violent, extremists the same people are candidates for Mahathagbandhan.” the BJP leader said.

On Friday, protest marches were staged at AMU against Macron. His posters were burnt and calls were made to boycott French products. Indian meanwhile has extended support to France against the recent terror attacks in their country.