Anarchy has come home to roost in India: What options do BJP have? 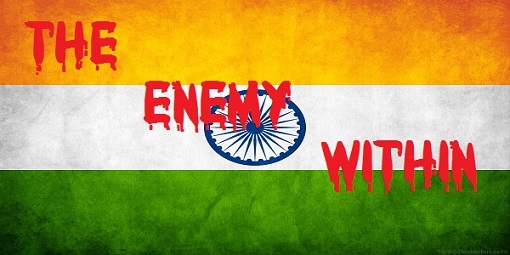 Is that what India has come to?

Most Indians are battling this conundrum.

This perceived breakdown, internal, is largely at two levels: (a) harmony between Hindus-Muslims; (b) Centre and state relations.

Both are interlinked. A power seemingly in perpetuity loses an election. And another. Both by a landslide. The winners are identified with majority. The losers with minority. The turfs have exchanged hands. It’s an existential moment for losers; like those countless in history where Czars and Caliphs came to rest in tomes and tombs.

Losers now rally their forces. It joins hands with those it was in fight with all these years. All the parts must matter in sum. It doesn’t. Those who made a meal out of caste politics in India’s heartland are uprooted; those who swore by Maratha identity sound like a hag’s croon; elsewhere in volatile Bengal, the monster-slayer Didi stomps ground, flashes eyes and fingers, yet barely keeps her head above the surging water.

The Winners are surer after second win. They know they have come to stay. They won on planks of development and incorruptibility. On keeping India First. So out goes Jammu and Kashmir and its armour of special status. Minority wakes up to post-Shah Bano world in Triple Talaq Act; Ram Janmabhoomi arrived at an opportune time; and then the long-standing Citizenship Amendment Act (CAA) is approved by India’s chosen representatives.

So Losers can’t win people’s confidence. The judiciary too doesn’t fall to their mechanisms. Prepaid media is doing its best but little is changing on the ground. Their Samaritans in movies, culture, academics have little traction. The echo-chamber in West is drowning in its own noise.

Anarchy thus is the last resort. It’s always two-faced: One is led by the system. The other by the people. As I mentioned at the start: Break it down at (a) people; and (b) governance level.

Anarchy at the people’s level is your anti-CAA protests, Hathras, Farms Bills, Reservation stirs etc, etc. Anarchy at the governance level is passing resolutions against the Central Acts in your State’s assemblies; refusing CBI a peek into your vice-dens; protecting your favourite police officers even against the judiciary’s strictures; and ridiculing Governors every alternate day.

Uddhav’s Maharashtra is taking it to the next level. Mamata’s police was bad on cartoons on their leader (Uddhav’s too as ex-navy officer Madan Sharma would testify); it would land on doors at different States;  a journalist here and there; but Uddhav’s is booking the entire Republic TV network—claimed 1000 of them ! Kangana Ranaut was just a teaser it would seem. What next?

Some fundamental issues are stake in India. How far could this anarchy be allowed? The ruling BJP apparently has two choices. Let the masses know who are their enemies. It would teach them a lesson in due course. The other option is to exercise the power that the Constitution empowers it with: Dismiss state governments. The long rope which BJP has extended to Mamata Banerjee in the last six years conveys they would rather not do it and leave it in people’s hands.

BJP also knows what is noise and what’s substance. The noise is the ant-Farm Acts stir in Punjab led by its Congress chief minister Capt. Amarinder Singh. It could pass assembly resolutions but nothing would come out of it. The Punjab government is saddled with enormous debts and in the era of GST, you can’t trot your own horse when the whip is with someone else. You need Centre at every stage: Disasters and finances are one thing; telecommunications and security is another. More so in a border State.

It doesn’t mean that BJP ought to be at peace with anarchy. Mandate comes with responsibility. Anti-CAA protests led to Delhi Riots. They didn’t see Shaheen Bagh become what it did in the end. It made even Supreme Court helpless. The State must never be seen soft. India can’t afford it. All societies run on larger good. Those sloganeering “freedom”, “democracy” and “Constitution” don’t mean a bit of it. This chimera must yield to rule of law. Or it would persist in our lifetimes; and in our children’s. To horrific consequences if a malleable power was to come to Centre.

(Meanwhile, don’t fret on the welfare of Republic TV. Nothing would come out of it. Indians don’t like or even see somebody being browbeaten. More so by Powers. Brazenly. Mumbai Police has taken a bigger bite than it could chew. So, enjoy the drama but don’t miss your routine. The Karma would catch up with Mumbai Police and the rulers in Maharashtra).