And then there were those who predicted 1.6 million Covid-19 deaths in India by August 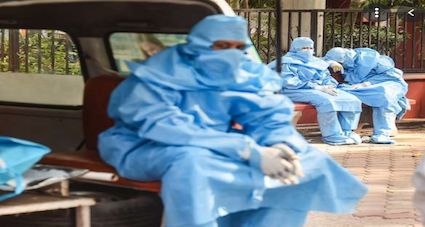 The Institute for Health Medical and Evaluation (IMHE) had earlier forecasted that India would suffer 1.4 to 1.6 million fatalities due to Covid-19 by August 2021. But, it reduced its prediction of fatalities by August after The Lancet cites its forecast.

However, it is worthy to note that despite revising the estimates, the figures of both The Lancet and IMHE are far from reality.

According to an article by IMHE, it suggested that India would witness around 1.4 to 1.6 million deaths by August 2021. Not only this, the article further alleged that the Indian government is not transparent in publishing Covid-19 related data.

Later, when the Lancet published its report, stating the death number would remain around 1 million, IMHE came up with new estimates, claiming that India would record  1.14 million deaths by Covid-19 in India by August 1. It further claimed that the number can also go up to 1.15 million death in the worst scenario.

However, as of today, i.e June 30, the current number of fatalities stands at 3.98 lakhs – that’s over 2.8 times less than the estimated number.

Not only the top western agencies but Lutyens media in India also propagating the agenda against the government. NDTV, for one of their interview, got one who is not even an infectious disease expert to express his opinion about the coronavirus outbreak in the country. Eric Feigl-Ding predicted that India’s Covid death tally will surpass the 5 million mark by August 2021.

During the interview with journalist Vishnu Som, Eric Feigl-Ding claimed, “The data in India is very poor. The number of deaths is not being reported properly. India is well on its way to million deaths by August 1.”

The dubious claims by these bodies reveal the fake propaganda of the agencies who cherry-picks the data and provide misleading and exaggerating conclusions to show Prime Minister Narendra Modi in poor light. Be it The Lancet, the IHME, or NDTV back home, the accuracy of the estimation of COVID deaths hardly seems to be an area of concern.