Angoorlata and her oath in Sanskrit 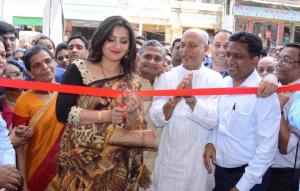 Angoorlata Deka, the newly elected BJP MLA from Batadroba constituency in Assam, has made front-page headlines with her oath in Sanskrit language. The newspapers are shocked at her audacity for don’t we all have given up the language as dead?

Our ignorance deserves a reality check. Sanskrit is one of the 22 languages listed in a Schedule to the Constitution. It’s the official language in the state of Uttarakhand. Since 1967, Sahitya Akademi has been giving award for literary works in Sanskrit. It’s true of adult as well as kids’ literature.

In all, there are 15 Sanskrit universities, thousands of Sanskrit colleges. Features films are being made in Sanskrit, the ones on Adi Shankaracharya, Bhagavad Gita and Mudrarakshasa (a film on great emperor Chandragupta Maurya) instantly come to mind.

An animated film in Sanskrit, “Punyakoti” is scheduled for release in 2016. There are more than 75 dailies, weeklies and monthlies in Sanskrit. We have television news in Sanskrit. No less than our Prime Minister tweets in Sanskrit. In Karnataka, two villages of Mattur and Hosahalli has everyone speaking in Sanskrit to this date.

All the 125 major languages and 1500 minor languages of the country can trace its origin on Sanskrit. It’s not just India alone, Nepal’s motto is a pick from Valmiki’s Ramayana. There’s Angkor Wat in Cambodia, the word Angkor meaning “City” in Sanskrit.

Initially, Sanskrit wasn’t known by its present name. It was called Bhasha. This was a fact at least till the 6th century BCE. It was essentially a spoken language. When rendered into writing, various different scripts were used. The use of Devanagari is of a recent vintage. In its grammar, letters and words freely merge to form compound letters and compound words. Two of these principals are called sandhi and samasa.

The greatest proponent of Sanskrit language was poet Kalidasa. His classics, such as Malavikagnimitram (the love story between King Agnimitra and Malavika), Abhijnanashakuntalam (the famous Shaknutala story) and Meghadutam (Cloud as messenger) haven’t lost its lustre till this day.

It’s a fallacy to believe that Sanskrit was only spoken by Kshatriyas and Brahmans in ancient times. Instances abound where commoners were known to use the language. In the Rig Veda, 21 out of 407 rishis were women. There was no gender bias in the use of the language.

Since 2003, India has a National Mission for Manuscripts (Namami). Its task is to list, digitize, publish and translate manuscripts at least 75 years old. As of now, Namami has a listing/digitization of three million—the anticipated stock of manuscripts in India is 35 milion. There are at least 60,000 manuscripts in Europe and another 1,50,000 elsewhere in South Asia. Ninety-five percent of these manuscripts have never been listed, collated or translated. To give you an idea of the enormity of the task: Since the advent of printing only an estimated 130 million books have been published in all languages of the world.

We don’t know the treasure waiting to be rediscovered. Take the instance of Arthashastra for instance. The classic on political economy and governance was written by Kautilya (350-275 BCE). But it was rediscovered by R. Shamasastry in 1904, published in 1909 and translated into English in 1915. We don’t know how many Arthashastra we have lost in all these centuries.

Same is true of many variations of scripts of Sanskrit. The sharada script, popular in Kashmir at one time in history, is completely lost. Same is true of Paishachi language and a very famous work in this script, Brihatkatha. Both are lost to us. Many Buddhist and Jain texts were written in Sanskrit too. And lest we forget, Ayurveda, the treatises on medicine, the work of Charaka (2nd century CE), no longer survives.

And here is the surprise of all surprises: “A Companion to Sanskrit Literature,” authored by Sures Chandra Banerji, has an entire chapter on the contribution of Muslims to Sanskrit. This volume traverses 3000 years of Sanskrit literature.

Naheed Abidi was bestowed with Padma Shri in 2014 for her contributions to Sanskrit literature. Her first book in 2008 titled “Sanskrit Sahitya Mein Rahim” is an account of the Sanskrit leanings of renowned poet Abdul Rahim Khan-e-Khana. Another bookof hers, “Sirr-e-Akbar” is a hindi translation of 50 Upanishads, earlier translated by the Mughal prince, Dara Shikoh into Persian. Naheed has published a Hindi translation of Vedanta, translated into Persian by Dara Shikoh and also the Sufi texts by the prince.

There is no denying the crisis though. The last Census in 2011 still don’t tell us how many speak Sanskrit in our country. The Census of 2001 had put the number to 14,135. There is an initiative from the government for the long-term vision and roadmap for the development of Sanskrit. Angoorlata’s act of oath has brought the Sanskrit language into popular mainstream and we ought to be grateful to her.

(This article is largely based on Dr. Bibek Debroy’s speech in Paris on the occasion of International Mother Tongue Day, organized by UNESCO on March 3, 2016).