Anti-Army Face? Our Opposition has no qualms 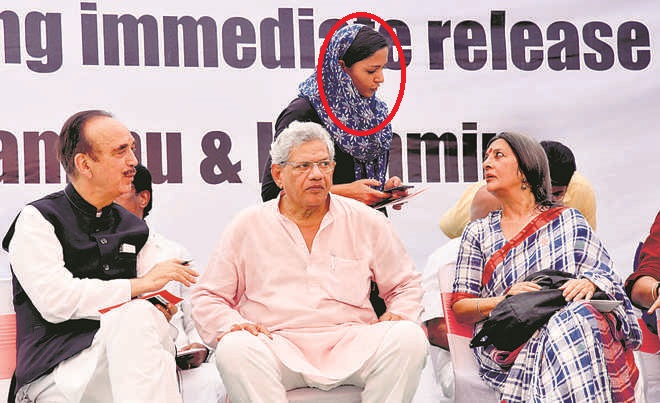 A father turns out a son who tries to destabilize the family. A criminal is sanitized if his presence is a threat to the society. A terrorist is neutralized if he has common people in his gun’s range.  Individuals or groups who are hazards are brought to book by those who have the assigned role to protect a society or a nation.

Thus we are looking at two ends of the spectrum. One end has the authority which has a job to keep a home or a nation safe.  At the other end are the suckers who won’t let it happen. At one end is the welfare of the millions. At the other end is the good of the few.  It’s no-brainer that individuals have constitutional rights only till they start imperiling the society.

Two such individuals are presently in public eye: One, a high-profile politician; the other a fringe player.  Both face serious allegations. Both are under probe. Both claim vendetta. Both are relying on hidden support from within the society.

Let’s presume that both P. Chidambaram and Shehla Rashid are not guilty. One has been named “kingpin” in massive financial scandals by no less than judiciary.  The other has been refuted by Indian army and hauled to court for inciting communal discord. The next logical corollary is: Who would decide they are innocents? When a criminal has ever admitted to his crimes?

That’s why society sets a mechanism which can arbitrate, punish or pronounce not-guilty.  This mechanism could be judiciary or law-enforcing agencies such as police, CBI or ED.  Irrespective of how one or thousands or millions feel, it’s this mechanism which we have entrusted to carry out justice. Everything else is gasbag—including you or me.

But try telling this to our politicians and media.  Both feed on each other.  When it’s convenient, they hail judiciary like they did on pronouncements on Ahmed Patel’s Rajya Sabha elections or favouring HD Kumaraswamy in Karnataka’s unholy tie-up. When it doesn’t suit them, they don’ t bat an eyelid in trying to impeach even the chief justice. CBI is “caged parrot” when it pursues cases against Mamata Banerjee or P. Chidambaram. But when the agency was in hot pursuit of Amit Shah, for instance, it was hailed for setting high standards of probity.

Just follow the headlines and editorials in our newspapers on P. Chidambaram. Indian Express in its editorial finds it revolting that P. Chidambaram was pursued in the manner he was done by the investigating agencies. It doesn’t question Chidambaram once on his reprehensible  conduct in not submitting himself to law and thus subverting the course of justice. No newspaper has given a headline that Chidambaram was deemed “kingpin” of grave financial misdeeds.  Just look at this headline in Hindustan Times: “Please sit, judge asked Chidambaram…He declines.” (As standing is a conduct of a morally upright person!).  Be it media or politicians, both are aghast that Chidambaram was not given urgent hearing by the Supreme Court. We even have a letter from a group of Supreme Court lawyers protesting against denial of urgent hearing to Chidambaram. Pray, god, when a matter is presented on Wednesday and the hearing is fixed on Friday, is it not urgent hearing?

Shehla Rashid has been hauled to court in a criminal complaint against her claim that torture and excessive force is being applied by Indian forces on Kashmiris. Indian Army was quick to make a strong rebuttal: “Allegations leveled by Shehla Rashid are baseless and rejected. Such unverified and fake news are spread by inimical elements and organizations to incite unsuspecting population.”

Did you find anyone in Lutyens Media question Rashid to either provide evidence or shut up. When she was cornered by journalists in an Opposition protest drama in the Capital on Thursday, she, instead of offering evidence, threatened to call police.

Has Lutyens Media questioned Shehla Rashid on fake allegations? Has it questioned the politicians of CPI or CPM, SP or BSP, Congress or TMC etc on what a fake news peddler who spreads lies on our Indian Army was doing on their platform of protest? Are we wrong to presume that these politicians, political activists and Lutyens Media have no regard for institutions and integrity of the nation and instead, could be hand in gloves?

This of course is not the first instance of transgressions by Shehla Rashid.  She posts old videos and pass them off as recent; an FIR was filed against her for spreading rumours after the Pulwama attack; she had once tweeted that Nitin Gadkari was plotting to assassinate PM Modi on which the former had threatened her with legal action; despite a video evidence of abusing the police, she termed Jignesh Mewani as victim; Delhi Police has filed a chargesheet against her in the infamous JNU sedition case;  She wanted United Nations to intervene on EVM issue as Modi seemed set to return to power in 2019 polls;  and she termed Modi a “mass murderer” after his fist win in 2014 polls.

All of Rashid’s allegations of course are unsubstantiated. She is encouraged into vomiting more of such diatribe as Lutyens Media lends a helping hand and investigating agencies dither in view of the entrenched break-India forces within the system. As Chidambaram was encouraged to be allegedly more corrupt even as his bête noire Dr. Subramanian Swamy asserted that former’s crimes are fit for a 500-year-long sentence. Why, Indian Express reserves top of his editorial page for Chidambaram every Sunday. Like Times of India is nonchalant about allegations of paid write-ups from across the border against one of its’ regulars, Shobhaa De.

All of this of course is unlikely to stop. Faced with an existential threat, these forces inimical to India’s interest would continue to spew venom in a concerted manner.  You would have letters from films, legal and writers’ corners tearing into Modi government for its violations of “democratic” principles. We, the stunned citizenry, must take note of these virulent rats which are a plague to India’s sovereignty.