Are refugees pawns in Germany’s game? 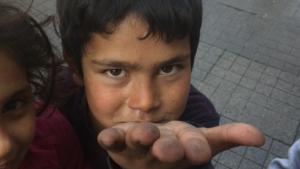 Newspapers are full with Germany’s generosity towards fleeing humanity from Middle East and Africa. “Hitler” Merkel has become “Mamma Merkel.” Upholder of liberty, equality and justice—all kind of nonsense is being planted by international news agencies. But hang on and save yourself from being a sucker.

Germany plans to take in 800,000 refugees by the end of this year. It could soon be a million. These grateful refugees could make up for an ageing population and help a country with one of the lowest birth-rates in the world. Refugees are being shared out among Germany’s 16 regions. A computer system works out which region takes in how many refugees, given its population and relative wealth. A fund of $6 billion is created for the purpose. With soaring public support, Merkel has a chance to extend her chancellorship of a decade in the 2017 elections.

That is not to decry the help refugees and their families are getting in this dire hour of survival. Germany has thrown a lifeline at them. But while celebrating the effect, we must not close our eyes to the cause which has caused this exodus: the brutal wars in Africa and Middle East, particularly in Syria to which Germany is party in aggression in support of  United States and others. This set of allies includes Saudi Arabia which has tents for one million refugees but hasn’t taken a single one. It includes Israel’s Benjamin Netanyahu who rejects refugees with statements such as “we are not a European country.”

Shouldn’t Germany help stop the cause rather than appear saviour in effect? Do we smell a rat in this humanitarian gesture? And if our suspicion is right, does it forebode an extremely dark time ahead for humanity?

Let’s begin with Turkey, an ally like Germany in US’ attempt to unseat Assad regime in Syria. This refugee crisis confronting Europe isn’t an overnight phenomenon. It’s been building since 2012. Turkey has a suspiciously “open door” policy to refugees from next-door Syria. Over a million refugees are in Turkey. It has helped them create “safe havens” in northern Syria which could be used by US/NATO forces to strike deeper towards Damascus and topple Assad.

Now suddenly Turkey has allowed its refugees to “escape” its camps and head towards Europe. Domestically, they could be preparing for the November elections. In relation to Europe, the idea is to heighten the Islamophobia, racism and security fear for Europeans to back whatever unlawful military aggression the United States and NATO intend to perpetuate in coming months and years. They want people behind them in order to crush the “evil” Assad and others in the Middle East and elsewhere.

So this “refugee crisis” could be contrived. It could be another way to topple the Assad regime. First they tried “freedom fighters” in the form of al-Nusra. Then Islamic State (IS) was created and was branded as a barbaric cult. They were thus able to elicit complete support of its people in a bid to crush IS. Now that it too seems to have failed, the only way they could have a naked aggression against Syria—in order to force a confrontation with Iran and Russia—is by having people rail against the atrocities in Middle East which has piled up refugees by tens of thousands at their doorsteps.

So, do welcome Germany’s gesture on asylum-seekers. But don’t drop your guard. You need to be wary of a country which only a month back had ruthlessly crushed Greeks aspirations for an austerity and debt-free future. It hadn’t then cared for fellow Europeans. Why they are now going overboard to welcome refugees from a region which they view fit enough to be dealt with howitzers, drones and deadly napalm bombs.  If indeed “sympathy” for the refugees is meant to provoke its European citizens to cry for “carpet-bombing” of Syria and Iraq, our world could be entering into the final phase towards a thermonuclear confrontation.

We should be anxious. Very, very anxious.