Are we witnessing a pushback from BJP? 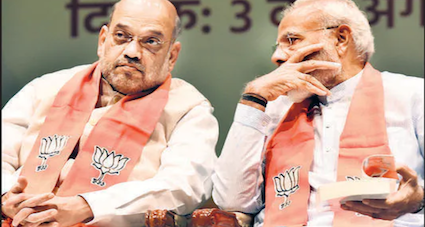 There seems to be a change of tack in how Bharatiya Janata Party is rising in defence of those who support, admire or share its approach to governance in India.

BJP’s Tajinder Pal Singh Bagga, a strident critic of Arvind Kejriwal and his party AAP, was “rescued” by the Haryana Police after Punjab Police had lifted him up from his home in New Delhi in a dramatic manner.

We now read that  the UP Police was in tow of its counterparts in Rajasthan Police who showed up at the door of TV 18 Hindi Editor Aman Chopra ostensibly to arrest him but finding the door locked, had a non-bailable warrant pasted outside his residence. If Chopra was in sight, indications are that the UP Police would’ve risen to his defence.

(Incidentally, this had come after Rajasthan High Court had ordered that no coercive action could be taken against the said journalist.)

The Uttar Pradesh Police was in news again a day ago when it slapped Samajwadi Party leader Azam Khan with another case after the Supreme Court had termed it a “travesty of justice” that he continued to languish in jail even after he has been granted bails in “86 of the 87 cases.”

Bulldozers are now likely to run in Delhi’s Shaheen Bagh today as part of MCD’s action against illegal construction and encroachments in the Capital with Delhi Police providing the security needed for such a sensitive operation.

This has come within days of Supreme Court stopping a similar drive by the MCD in Delhi’s Jahangirpuri area where riots had been witnessed only hours ago. It’s seen as a defiance by the MCD for Shaheen Bagh, like Jahangirpuri, is perceived an enclave with heavy Muslim presence. Though many sites, and not just Shaheen Bagh, is slated for MCD’s demolition drive, the nub of the matter is not lost on engaged citizenry.

And then we hear that BJP is to provide job to each of its 204 workers who were killed before and after the West Bengal polls last year. There was this angst among its supporters that the party had abandoned its ground workers who found themselves defenceless against violent blowback by ruling dispensation in Bengal, as mentioned by the National Human Rights Commission (NHRC) in its report, and the resultant case which seemingly is pending in judiciary for ages.

All this appears in sharp contrast to what was generally perceived to be a lackadaisical approach by the BJP to forces who were aligned with its ideology and who bore the brunt of Opposition’s ire, as was the case with Arnab Goswami whose arrest in Mumbai was made a matter of public spectacle, ostensibly to drive fear in the hearts of those who bore similar viewpoint.

Now that this “new” BJP has joined the matter, this slugfest between them and the Opposition, with attempts to align the police and judiciary on their respective sides, would only intensify.

The tragedy is nobody appears neutral—neither political parties nor law and order enforcing agencies—which would cast a long shadow on the common, defenceless citizens and the future of our Republic, the grandstanding on “sanctimony” of our Constitution notwithstanding.

If we remember that India is within sniffing distance of General Polls in 2024; and that the imperialist/globalist forces which spout unrest in “defiant” countries would exact its revenge onIndia for its principled stand on the Ukraine Crisis, the common life in this country is in for a big, big disruption, possibly unseen since our independence in 1947.

It appears a fight to finish for forces who called the shots in this country for decades and who now perceive that the BJP can’t be replaced from the pole position unless and until unethical if not extra-consittutional measures, are resorted to.

All kind of influence—of money, muscle and media—is being put to use and it has nothing to do with the welfare of the common man.

It also bears relevance that neutrality possibly is no longer an option for a common citizen. You could be judged by your caste and religion if not by your ideology and would be open to danger from the forces, aligned one way or the other.

There are no Rules left in the game now.

Equality of all, as the abiding principle of our Constitution, would acquire a malleable form.

Neutrality is no longer an option for you or me.