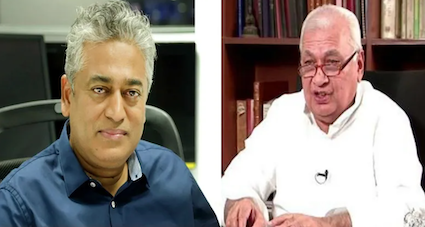 Sardesai asked Khan how did he see his identity as an Indian Muslim. Khan, visibly annoyed, responded:

“The British never considered India as a nation. They always considered it as a conglomeration of communities. But this constitution considered citizens as the constituent unit of India. Where is the question of communities now? Come to my village and ask a Muslim about what is this Muslim question. He will be perplexed. Because he is facing the same problems as those faced by peasants belonging to other communities. Just because someone in Hyderabad said there exists a Muslim question, we have taken it seriously,” Arif Mohammad Khan said.

Speaking on the segment ‘Majority, Minority: The Battle of Belonging’ during the India Today conclave in Delhi, Khan said the Indian civilisation and “our cultural heritage” has no concept of discrimination on the grounds of one’s religion.

“It is not only our Constitution that gives equal rights to people, but more than that our cultural heritage, the Indian civilisation, has no concept of discrimination on the basis of the religion, therefore to link the two, I find it preposterous,” he said.