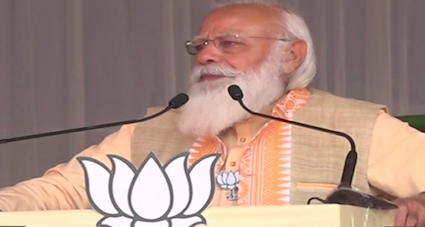 Prime Minister Narendra Modi highlighted a telltale video of Badruddin Ajmal, in alliance with Congress in Assam, where the leader of the All India United Democratic Front (AIUDF) is seen insulting the very identity of Assamese people.

In the video (below), Ajmal is seen throwing Gamosa with contempt as it was being presented to him by way of felicitation in a public rally.

Gamosa (Ga=body, musa= to wipe), is a piece of cloth which is of immense significance to the indigenous people of Assam. It’s a white cloth with red border on three sides and red-woven motifs on the fourth.

“Congress says these tala-chaabi vale (AIUDF election symbol) are the identity of Assam…They have surrendered to these forces; the action (insulting the Gamosa) has hurt the people of Assam enormously…It’s a Mahajhoot (hugely lying) and not Mahajot (Grand Allaince)…They would be duly punished by the people of Assam,” said the Prime Minister in a rally at Kokrajhar on Thursday.

“…Understand the lies and conspiracy of Congress. It has surrendered before such people come back to power. Not only Congress but the entire mahajot will be punished for this insult.”

Congress has surrendered before those who insult the identity of Assam…#AatmanirbharAssam pic.twitter.com/INI6zGHfd3

Congress-AIUDF and Bodoland People’s Front (BPF) have formed an alliance for the ongoing Assam polls.

“Congress has handed over its ‘hand’ and fortune to leaders of that party which had pushed Kokrajhar into violence. Congress is dreaming of coming to power in Assam with the help of those people whom it had saved for its vote bank.”

PM Modi said, the people of Assam will show the Congress-led alliance a ‘red card’. “Football is popular among youth in Assam. If I’ve to speak in their language, I would say that the people have yet again shown a red card to the Congress and its Mahajot.

“This is an election between the ‘mahajhooth’ of ‘mahajot’ and ‘mahavikas’ of double engine. The people of Assam trust the NDA for the development, peace, security of the state. They have given blessings to NDA in Phase 1 of assembly poll.

“In long years of its rule, Congress threw Assam into bomb, gun and blockade culture, but NDA gifted peace and respect,”

Appealing to people to vote for the BJP, the PM said peace, progress, protection are the party’s mantra for Bodoland territorial region.