As UP elections beckon, Left-Liberals resort to spreading communal tension 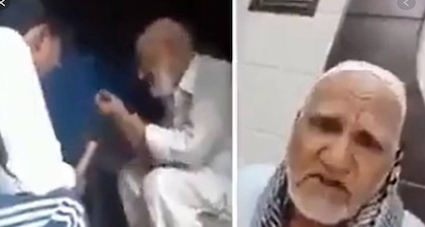 A viral video on social media was shared by Alt News co-founder Mohammed Zubair claiming that an elderly Muslim man was beaten up allegedly by a Hindu mob and was assaulted and forced to chant ‘Jai Shri Ram’ after abducting and confining him in a secluded house in Ghaziabad.

Zubair tweeted, “An elderly man, Sufi Abdul Samad Saifi was attacked by five goons in Loni, Ghaziabad. He was threatened at the gunpoint, beaten, assaulted, and they forcefully chopped off his beard.”

Here is a video of Abdul Samad Saifi narrating the complete incident. He claims he was forced to chant ‘Jai Sri Ram’ by the goons. pic.twitter.com/QPfJwNBJEs

However, it seems Left-Liberals have kicked off next year’s UP elections with customary lies and deception.

Zubair, being infamous for peddling fake stories and lies to support his petty political agenda, was pulled up by none other than Union Minister of Minority Affairs Mukhtar Abbas Naqvi. Naqvi quoted the Ghaziabad police tweet that mentioned that the three accused who had been arrested in the case were Muslims and not Hindu. He further attacked Zubair for trying to communalize the incident.

Hours after the video went viral, the Ghaziabad police have released their statement and reportedly mentioned that the incident took place on June 5 and was reported to them on June 7. They had registered an FIR and so far arrested Arif, Adil, Kallu, Polli, Mushahid – a gang of Muslims in the case. The police had initially arrested Parvesh Gujjar while Adil and Kallu were nabbed on Monday.

According to them, they had beaten Samad after the amulet he sold to them apparently turned out to be harmful, unlike what Samad had alleged in the video

It is also worthy to note that Samad claimed in the video that he was coerced into chanting ‘Jai Shri Ram’ but he had not made such allegations in his complaint with the police. Ghaziabad SSP Amit Pathak had confirmed the same. Pathak further informed that they called Samad to join the investigation but he never came back to them.

While the Muslims were found to be involved in beating the man of their own religion, many so-called “left-liberal-neutral” social media warriors and prejudiced journalists the Left-liberals didn’t miss the opportunity to add fuel to it to serve their personal agendas.

Swara Bhaskar, the new favourite of Left-liberals who chooses to be vocal only on selective matters was quick to blame Hindus, claiming that “she is ashamed.”

I’m ashamed. I’m ashamed of what happens in the name of our Gods.
Hindus in India and abroad.. who want every Muslim to constantly condemn terrorism in the name of Islam.. am I hearing your voices now when our Gods and our religion is being misused to justify this brutality?!? https://t.co/CmgCIUD1oN

How journalist Arfa Khanum can be left behind when the topic is something as sensitive as Hindu-Muslim? She was also caught singing the same tune.

A Muslim man of yr grandfather’s age was brutally slapped,thrashed, kicked,his beard was violently cut while he was forced to chant JaiSriRam.
The cutting of the beard was to insult him for his religious identity.
This happened in the name of Hindus.
Your silence is your approval

Another thing that demands attention is the role of Twitter.

The video which Zubair shared did not carry any audio but he still claimed that Saifi was forced to chant ‘Jai Shri Ram. The authenticity of the claim has turned out to be dubious as the police have clarified that Samad hasn’t mentioned any such allegation in his complaint. Despite this, Twitter hasn’t tagged the tweet shared by Zubair and his likes as manipulative.

All these facts clearly point out how the propagandists have resumed their work of spreading lies and have decided to portray every incident in a communal light.