Ashutosh, check your facts on Hindutva 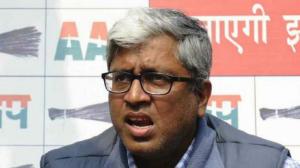 Ashutosh, a spokesperson of the Aam Aadmi Party (AAP) has appeared in the op-ed page of Indian Express today (April 27, 2017) which is one place to meet/read most of those who are plotting overtime to break India along communal lines and put the blame on RSS and Modi-government.

We, at the NewsBred, make it a point to confront such a narrative. Much of RSS’ and Hindutva’s idealogues mistake has been to concentrate on social reforms and leave the field of academic and media manipulation to Nehruvian-Left combine. It has had a disastrous effect. The Left-Liberals have worked overtime to divide the people on sectarian and communal lines. India First thus could never get off the ground.

Ashutosh, a JNU alumni, largely targets two of RSS’ main idealogues—M.S. Golwalkar and VD Savarkar. He quotes from their works to show they were anti-Muslims and anti-Christians and their concept of Hindu Rashtra didn’t have any scope for minorities. He says this philosophy is being brought to fruition under the present dispensation. Says Ashutosh: “This is a desire for civilizational conquest.”

Ashutosh quotes from Golwalkar’s Bunch of Thoughts: “There are three enemies of India–Muslims, Christians and Communists.” He further accuses Golwalkar as a fascist who was inspired by Hitler.

Dear Ashutosh, are you aware of these words of Golwalkar: “The Muslims must realize that we are all one people and it is the same blood that courses in all our veins.”

Or, “Let the Muslims evolve their own laws.” (as a caution against the Uniform Civil Code).

Before we come to the Hitler part, let’s dwell on the Muslim/ minority bit a little longer. It’s a fact that Golwalkar was embittered by partition and the two-nation theory. He also feared the religious identity of Muslims could keep them emotionally in sync with Pakistan and work to India’s disadvantage.

While evaluating this sentiment of Golwalkar, as well as on Hitler, we must remember that men are product of their times. India was hurting under the yoke of British and an enemy’s enemy is one’s friend is perfectly logical. Hitler thus could have been seen as useful to fight British; as imperialist Japan was seen to be useful by Subhas Chandra Bose. It’s also pertinent to remember that Jewish people were the role model of Golwalkar. Its not a profile of a man who was anti-Semitic or proponent of Hitler’s fascism.

Ashutosh further claims that Veer Savarkar’s idea of India was not “common love” but “common blood.”  Well, this is what Savarkar wrote in Essentials of Hindutva, and I quote:

“Afer all, there is throughout this world so far as man is concerned but a single race—the human race kept alive by one common blood, the human blood.”

This doesn’t look like words from a man who wanted Hindu supremacy.  Indeed, when confined in Ratnagiri, Savarkar invited all untouchable families in his house and dined with them. The Pan-Hindu canteen and Patit Pavan Mandir are standing symbols of his efforts.

It’s been the ploy of mischief-makers to take a sentence or two out of context and paint an individual, organization or a movement in a poor light. Let’s make a few points in this regard:

One, RSS doesn’t follow a book. Indeed, Hinduism doesn’t follow ANY book. Golwalkar’s Bunch of Thoughts isn’t a recommended reading in RSS. Indeed, take a head count and you won’t find 10 persons in RSS who would’ve read the book

Two, RSS has no qualms in denouncing or apologizing their own actions. It was Golwalkar himself who repudiated and withdrew his book “We the Nationhood Defined” in 1948. RSS also officially disowned the book in 2006.

Three, not all BJP men are from the RSS. For example, the present chief minister of Uttar Pradesh, Yogi Adityanath is not from RSS. (So Ashutosh stop suggesting that RSS, VHP, BJP are all the same).

Because of this brain-wash, Muslims in India consider RSS to be an existential threat. It’s time they consider the points below and repudiate this propaganda of India-breakers who are anybody’s friends but theirs.

Attend any Hindu festival in RSS shakhas and you would see all caste participate equally. There is complete harmony among followers of all religions. Many of them are untouchables and yet they distribute “prasads.”

The harder men like Ashutosh try to create a communal divide, the stronger should be our resistance to it. India First should always supersede our religious identity.