Assad breaks his silence: A must read 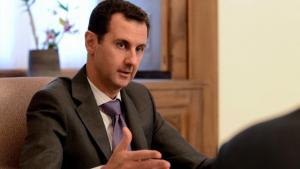 Syrian President Bashar al-Assad says Turkey downed a Russian jet over Syria because Moscow has turned the tide against foreign-sponsored militants in the Arab country.

The downing of the warplane “has shown the real intention of [Turkish President Recep Tayyip] Erdogan who, let’s say, lost his nerve just because the Russian intervention has changed the balance on the ground,” said Assad during an interview with the Czech Television channel broadcast on Tuesday.

Russia began airstrikes on Daesh positions in Syria on September 30 at the request of the Syrian government.

On November 24, Turkey shot down the Russian Su-24 bomber, which it claimed had entered its airspace – an allegation Russia strongly rejects.

The “failure” of Erdogan’s “terrorist groups means his political demise,” he added in the interview which was conducted in the Syrian capital Damascus.

Assad also said that peace would only return to Syria when “France, the UK, the US, Saudi Arabia, Qatar and some others stop supporting terrorists.”

The Syrian president stressed that the only way to defeat the Daesh Takfiri terrorists is to “cut and suffocate their supplies, their armaments and money,” which come through Turkey with the support of Saudi Arabia and Qatar.

Also referring to France’s recent commencement of aerial strikes on Syria, he said they were only “to dissipate the feeling of the French” people following the November 13 Daesh attacks that claimed the lives of some 130 people in Paris.

In a November 14 statement released by senior representatives from 17 countries, the UN, EU and Arab League participating at Syria talks in Vienna, it was agreed that Syria should have a transitional government in six months and hold elections in 18 months.