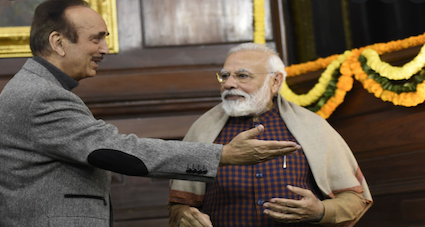 There are telltale signs of a Congress split—and it could happen before the promised elections for the president’s post in June.

At a time when five assembly elections are due over the next four weeks, the rebel “G-23 dissenters” are busy wrecking the chances of party: They are neither campaigning or not allowed to do so and they have eased themselves in Jammu till Monday before they move their tent to Himachal Pradesh and then reportedly to Uttar Pradesh, Gujarat etc.

Yesterday the “G-23 dissenters” fired their first salvo in Jammu where leaders like Kapil Sibal and Ghulam Nabi Azad showed their concern over the weakening of Congress party in the last decade. Today, Azad dropped a bombshell in openly praising prime minister Modi from a public platform.

While addressing a gathering, Azad said: “I find several qualities admirable in different leaders. I hail from a village. I feel proud when leaders like our Prime Minister say that he too hails from a village. We differ with him political views but he doesn’t shy away from his roots.”

Then Azad dug the knife that bit deeper. He pointed out that the top brass of Congress has “lost touch” with reality. “The moment you disconnect yourself from your roots, you start living in a world of delusion. I have travelled across the world but my true calling lies in my own village,” he stressed.

This is not all. The next stop is said to be Himachal Pradesh from where Anand Sharma hails from. From then on, the camp would move on to Uttar Pradesh, Delhi, Haryana.

It is one thing that Azad and Sharma carry their own grouse. There is no talk of renominating Ghulam Nabi Azad in Rajya Sabha from where he recently finished his stint. Sharma is cut up for he wasn’t made the Leader of Opposition which has gone to Rahul Gandhi loyalist Mallikarjun Kharge.

From the time the dissent broke out in the Congress camp last August, it’s never really died down. The dissenters had written a letter to Congress interim president Sonia Gandhi about the party being “leaderless” and “rudderless.” The party is without a full-time president since Rahul Gandhi quit after the humiliating Congress defeat in the 2019 general elections.

The top brass of Congress, expectedly, have made a sharp reaction to the development. They have said that the visit to Jammu by “G-23” group is a private and not an official visit. “Neither did we ask for the visit of these leaders, nor has the party leadership in Delhi deputed them to pay a visit to Jammu. But after coming to know about Azad Sahib’s Jammu visit, we requested him to meet the J & K unit party leaders at Pradesh Congress Committee office in Jammu,’an unnamed Congress leader was quoted from Jammu in India Today.

Apparently, this standoff is because the “G-23 dissenters” don’t want Rahul Gandhi to become the party president again. If Rahul is propped up again, they are likely to field a candidate of their own in the elections for president’s post. They couldn’t be happy now that Rahul Gandhi has said that South (India) is very different from North (India) which won’t please the stalwart leaders from North such as Azad, Anand Sharma, Manish Tewari and Kapil Sibal etc.

The net result is that Congress appears a house divided at a moment as critical as the present one when four States and one UT election has knocked at the door. This recalcitrant attitude of the dissenters would continue unless they are assured of something tangible from the party high command, read Gandhis. How this works out would be interest not just to political hawks, and cadres, but also millions of voters in this country.