Badruddin, riding on Congress, and becoming CM, is Assam’s nightmare 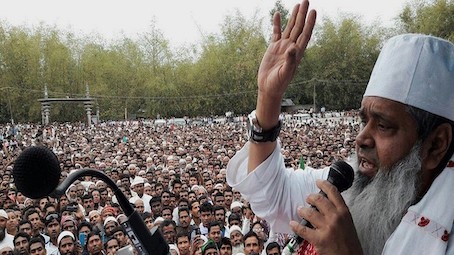 Badruddin Ajmal, the three times Lok Sabha MP from Dhubri in Assam, has clearly emerged as Owaisi of the North East. Just as Asaduddin Owaisi of All India Muslim Ittahadul Muslimeen (AIMIM) rings a bell to Muslims around the country, Badruddin is chiselling his profile with Bengali-speaking Muslims of Assam. He needs be understood in rest of India.

His party, All India United Democratic Front (AIUDF), made an impressive debut in 2006 assembly elections winning 10 seats. It peaked with winning 18 assembly segments in 2011 and was well placed with 13 MLAs in 2016. Incidentally, it was only in 2005 that this party was born as Assam United Democratic Front (AUDF). The letter Assam got changed to All India by the time it made its impressive electoral debut.

In 2016, before winning the assembly elections in Assam, the BJP seemed less worried about the ruling Congress than Badruddin. That in itself says a lot about his factor in Assam where he thrice won from his home turf Dhubri in 2009, 2014 and 2019. The BJP’s main worry about the Dhubri MP was that he could become even CM of the state, with Congress help!

Incidentally, the Congress had supported Kumaraswamy as CM of Karnataka at one time to keep the BJP at bay. Something similar happened in Maharashtra with Uddhav Thackeray. (So much for the democracy and secularism veneer).

Now in Assam. In the event of BJP not winning a clear majority. It’s a fight for existence for some forces in India. This was openly said by no less a leader than Hemanta Biswa Sarma, a Congressman turned BJP ace in the run-up to the last assembly elections. Even now in 2021, when the BJP is trying to do an encore in the state, party stalwarts are taking Badruddin as the most serious challenger for them.

The B versus B, that is the BJP versus Badruddin battle that is shaping up, may seem communal to a casual observer. But that is far less than the whole truth as identity politics plays out at multiple levels. Sarma claims that it is in close to three dozen assembly seats that the Bengali speaking Muslims, essentially of Bangladeshi origin, have an overwhelming influence.

Any and every seat gained by AIUDF in the assembly weakens the indigenous Assamiya and is a serious threat to the Assamese identity, most BJP leaders say. In recent times, exodus of students and workers hailing from North East states from Karnataka, Maharashtra, Andhra Pradesh and Kerala had occurred. Several politicians from various NE states had then laid the blame on Badruddin for orchestrating the violence.

As president of the Jamiatul Ulama e Assam, as also by controlling powerful NGO Marakazul Ma’arif which runs schools, orphanages and hospitals, Badruddin wields considerable influence. His business empire, with roots in some Arab nations, also gives him strength as a politician. Being a scholar who had studied at Deoband at one time, Badruddin’s contacts across states make him a formidable foe for the BJP.

For long now, the lone AIUDF parliamentarian has been a part of the Congress-led United Progressive Alliance (UPA). It is difficult to say whether this relationship has been more advantageous to the AIUDF, or the Congress.

Bengali-speaking Muslims pose an “existential crisis” for the indigenous Assamese, locals claim. Badruddin’s agenda remained unclear for now but the faultlines are getting sharper as we move to home run in the Assam assembly elections.