So Barkha you want such ‘freedom for media’ 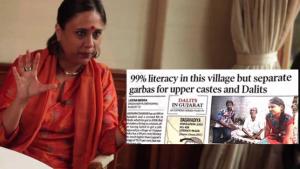 “Is this the kind of freedom Barkha Dutt wants for Indian media,” my wife, sipping her tea, asked me this morning.

She was drawing my attention to a front page, four-column screamer of a headline “99% literacy in this village but separate garbas for upper castes and Dalits (see image).” This story, about Dagavadiya village in Gujarat, ran over two pages and over 1000 words in Indian Express (August 13, 2016) today.

First of all I had difficulty in locating the word “garba” in this story which in terms of space is the biggest reportage in Indian Express of today. After three attempts, I did find it—just once buried deep in the story.

Let me quote this entire, one-off sentence of the story which, with the help of one or two photographs, could have taken up an entire page of a newspaper: “During the Navratri festival there are three garbas—one organized by the upper caste and OBCs, and two by Dalits.” That’s it. No further mention of garba in the entire story. Yet a screaming two-decker Front Page headline.

There is no background on why there are “separate” garbas in the story. Is the background necessary? Bloody hell it is. Please pay attention to these passages in the story:

What? Yes you read it right. THE DALITS THEMSELVES SAY THERE IS NO UNTOUCHABILITY IN SCHOOLS AND CHILDREN SIT TOGETHER TO STUDY AND EAT.”

I was rapt in attention as my wife kept speaking: “So the logical question is: if there is no untouchability in the concerned village and that upper castes and Dalits have gone to temples together, why the garbas are celebrated separately? And if Dalits celebrate two garbas,—AND MIND YOU THE STORY QUOTES NO ONE ON THIS “FACT”—it ought to be seen as “discrimination” against the upper castes, if anything.”

“And this is not all, the story also says that there are new toilets for Dalits under Swacch Bharat mission in the village,” added my wife.

Let me ask you the readers a simple question: Look at the headline and what’s the conclusion you draw from it? It is that upper castes “discriminates” against Dalits. Yet the entire story is all about how there is no untouchability in the village. Indeed, the question you are left with after reading this laboured, disjointed shameful story is that why Dalits celebrate two garbas? And if it is such a big news then why did not Indian Express expand on the theme? Apparently length wasn’t an issue with this story as it is a “wordathon.”

This is the “Dalits In Gujarat” series Indian Express is running on its front pages these days. The headline is an overreach to polarize the society. And if this the kind of freedom Barkha Dutt wants for Indian media, then sorry you won’t have it. Certainly no longer. When she says about Arnab that she is “ashamed to be from the same industry as him,” it is she and her silence on such shameful media which shows her to be complicit (didn’t she say silence is complicity?) If you have the welfare of Indian media– and Indian masses I suppose—in your heart, stand up and be counted.

Like sand, Indian Express’ reputation is slipping through its fingers. Such non-factual, divisive, polarizing stories will keep appearing it seems till the present government is in centre. On behalf of its readers, NewsBred welcomes if Express responds to my piece. They could also tweet their reply at @mypresscouncil,

It’s also a call to you readers: please read your newspapers carefully and don’t gulp them down as facts. There is a section of media which wants a polarized and weak India. For the future of our children, let’s not fall for such newspapers. Haul them to account at @mypresscouncil. That is, if you don’t burn them down for want of toilet paper.