Battle of Longewala: If this doesn’t bring respect for Indian army, nothing would 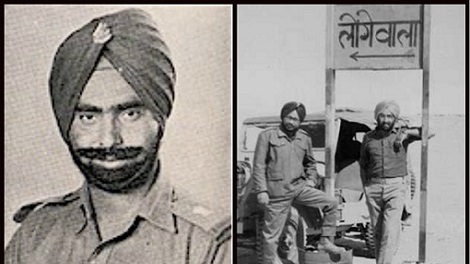 (It was Deepawali last month. Like every year, prime minister Narendra Modi chose to celebrate it with soldiers. On this occasion he chose Longewala Post and mentioned the bravery shown by our soldiers five decades ago.  The 50th year of that battle, one of the most remarkable in military annals, begins today).

The key to success of the defenders entrenched in Longewala when they came under attack on December 4, 1971, was not fire, but “hold your fire” (till the last moment) orders they adhered to. Vastly outnumbered by the attacking Pakistani tanks, barely 92 Indian soldiers scripted a story of valour that gets told repeatedly till this day. The post had 120 men in all but Second Lieutenant Dharam Vir Bhan, with 20/30 men, was sent on patrolling to keep an eye on the movement of the enemy.

Sure enough, at 11 pm on December 4, the patrol reported on wireless set that they could hear the sounds of tanks moving towards Longewala. Major Kuldeep Singh Chandpuri passed on this information to his superiors but there was no way help could be rushed in at such short notice. The post didn’t have enough mechanised transport, meaning vehicles, to enable all the soldiers to evacuate to any rear position. The battles this outpost waged over December 4, and the  next couple of days, turned Major Chandpuri, who led them, a household name. A braveheart like few in the annals of military valour.

(Major Kuldeep Singh Chandpuri being decorated with Mahavir Chakra by the then president VV Giri).

J P Dutta’s film “Border”, starring Sunny Deol, a major Bollywood hit of its times, was based on screen adaptation of the Battle of Longewala. Sunny assayed the role of Major Chandpuri, who later retired as a Brigadier, and was a buzzword for bravery. Of course, the filmmaker took liberties with the original events as they have been recorded in military accounts.

It was sheer providence and good luck of the defenders for that desert outpost in Jaisalmer had a barbed wire fence around it. That fence was put in hastily by the defenders to mark the anti-tank minefield they had created around the post. The post lost one man who died while laying down anti-tank mines in the vicinity. The tanks in the vanguard of the attack then halted in their tracks, called the support engineers and lost invaluable time. It was then the turn of the tanks and attacking infantry soldiers to fall like nine pins, mowed down by accurate fire of the jawans of 23 Punjab Regiment. Till the very last moment, the post defenders held their fire, and let their guns do all the talking once the Pakistanis were within effective firing range.

The post had sufficient support arms like RCL (recoilless) guns and rocket launchers, which proved deadly against the tanks. It helped the defenders that they were on a slightly elevated ground on a sand dune and could clearly see the movement of the enemy on a full moon night. Those less than 100 soldiers, 92 to be precise, were Sikhs all drawn from different districts of Punjab and Dogras in support role.

It needs to be mentioned here that the 1971 war with Pakistan had broken out officially less than 24 hours earlier on December 3 with Pakistan Air Force attacking several Indian Air Force (IAF) runways. They had managed to shoot many fighter aircraft on the tarmac and rendered some air strips unworthy of being used. Given this, and knowing the strategic importance of Longewala post, all men there were anticipating serious fighting to break out any moment.

The adherence to laid down SOPs (standard operating procedures) down to the last detail, including the sending of the patrol, helped the defenders in the task assigned to them. Major Chanpuri is on record as having said in an interview later that the post was attacked by 60 tanks and 3,000 men!

(The Pakistan infantrymen leading the attack were drawn from a Baloch Regiment. Present Pakistan Army Chief General Qamar Javed Bajwa is from the Baloch Regiment, who has blocked the promotional avenues of many senior generals after being granted a three-year extension. More about that someday.)

Reverting back to the battle day, rather night, that we were discussing, Major Chandpuri was conveyed clearly that no help was likely to reach him for six hours or so. Many of our readers may be wondering why IAF fighter aircraft could not have been rushed in at that moment. The answer to that question is very simple: IAF aircraft of that era were not capable of undertaking any combat flying missions at night! The confirmation of the forward thrust of the Pakistani tanks and infantry was given by an aircraft which flew on a reconnaissance mission.

The main component of the 23 Punjab Regiment was located at Sandhewala, 17 km north-east of this Longewala post. This post was only 14 kilometres from the Pakistan border and the enemy had planned to overrun it to move to Jaisalmer and beyond. Major Chandpuri and his gallant troops proved to be a thorn in the flesh which would just not go away.

It was said later that the ambitious plan drawn by Pakistani generals was flawed from the beginning. One major flaw was that no advance reconnaissance of the area through which the lightening forward thrust of the armoured units had been planned was done. This was to prove a serious flaw indeed as the soft sand proved to be a tricky terrain as tanks got slowed down considerably, barely moving sometimes on soft sand!

On a moonlit night, the defenders had a field day as they used the mortars and RCL guns, plus MMGs (medium machine guns) to devastating effect. The holding positions Longewala men had prepared proved to be impregnable despite repeated assaults of the enemy. They are reported to have accounted for a dozen tanks using their RCL guns, mortars and MMGs! Of course, they lost two men, who made the supreme sacrifice, and one RCL gun was also blown in enemy fire.

At 7.30 am on December 5, IAF fighter aircraft rushed to bombard the tanks and enemy infantry. Despite the IAF joining the action and shooting the tanks merrily virtually like sitting ducks, it was surprising that the PAF didn’t engage the Hawker Hunter and Marut fighter aircraft. Some IAF fighter pilots who participate in this action described it as a “turkey shoot” later.

The devastation wrecked on the enemy forces was one of the heaviest casualties recorded in any battle globally. The Longewala defenders lost two men, as already mentioned, and the fatal casualties on the Pakistani side were 200 soldiers, translating into an unbelievable 1:100 ratio!

Overall, there was a loss of 34 tanks for the Pakistanis, around two dozen accounted for by the IAF and a dozen perished as 23 Punjab retaliated. Some tanks were captured after being abandoned by their crew who took to their heels along with the retreating infantry troops. Soft sand burying the tank tracks and making any movement impossible left them little choice. The entire area near the post, all the way to border, resembled like a graveyard of tanks and over 500 vehicles by noon of December 5.

“Anyone who runs away would be shot, including me”

In the movie “Border”, there is a seen in which Sunny Deol (as Major Chandpur) is seen lecturing his men to fight to the last bullet and not withdraw an inch. It actually happened, veterans of 23 Punjab, later recounted. They said that Major Chandpuri had said that he will personally shoot anyone seen leaving his position and running away. He also told all his men that all of them were free to shoot him if they saw him running away from the battle.

The Battle of Longewala is a classic textbook battle in the sense of what constitutes the definition of “defenders’ advantage”. If one wants to give an example of the phrase “digging in heels”, very few reallife situations can better describe that.

A judicial commission later was set up by Pakistan to look into the causes of the disproportionate losses suffered by them. It recommended that the commander of 18 Division, Major General Mustafa, should be tried for negligence during war. The gross underestimation of the defensive capabilities of the Longewala post was the undoing of the assault troops.

Some weeks after the war, British Field Marshal R M Carver, the Chief of British Army, visited the Longewala post to gain first-hand knowledge of how things unfolded! He interacted with young Major Chandpuri who had only eight years of service at that time. For setting up an unparalleled example of leadership, Major Chandpuri was awarded the second highest gallantry award for military personnel, Maha Vir Chakra. Some other men won other awards, including two Vir Chakras, citations etc.