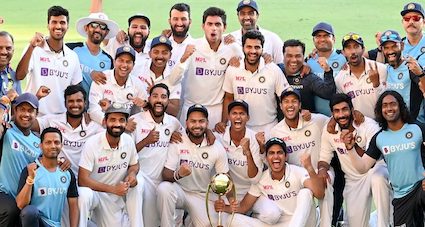 With their stellar performance, Indian cricket team achieved a historic win in the 4th Test against Australia at the Gabba in Brisbane to win the series 2-1 and retain the Border-Gavaskar Trophy. This victory means so much more because it came at ‘Fortress Gabba’: This is the first time that Australia have been beaten in 32 years. Australia’s last defeat at Gabba came at the hands of the West Indies in 1988.

Applauding the team player BCCI President Sourav Ganguly took to Twitter to congratulate the Indian team and announced the bonus. “Just a remarkable win…To go to Australia and win a Test series in this way ..will be remembered in the history of indian cricket forever ..Bcci announces a 5 cr bonus for the team ..The value of this win is beyond any number ..well done to every member of the touring party..,” Ganguly Tweeted.

Former cricketers and fans on social media hailed Team India efforts on the Australian soil to retain the Border-Gavaskar Trophy for the third consecutive time.

“We are all overjoyed at the success of the Indian Cricket Team in Australia. Their remarkable energy and passion was visible throughout. So was their stellar intent, remarkable grit and determination. Congratulations to the team! Best wishes for your future endeavours, ” PM Modi tweeted.

A virtual celebration began on Twitter with a large number of political leaders among others putting out congratulatory messages. While Sachin Tendulkar said that the team got a new hero every time they batted, former Indian bowler  Harbhajan Singh said this is the biggest series win ever.

#TeamIndia has proved it again by team efforts, great character, courage & max determination! Despite the bruises, the team made it possible for our country. That’s why we play for the country’s flag to go high every time we perfomFlag of India#INDvAUS

From what happened in Adelaide to this, these young guys have given us a joy of a lifetime. There have been World Cup wins but this is special.

And yes,there is a reason Pant is extra special.”