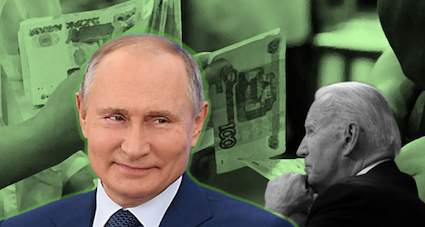 Russia’s President Vladimir Putin on Monday asserted that despite the sanctions coordinated by the West against his country, Russian economy “will remain open” in the new conditions.

At a meeting of the Russian Duma officials and his finance ministers, Putin reiterated that Moscow will “expand cooperation with those countries that are interested in mutually beneficial partnership,” referring to the East Asian allies.

He insisted that a  “whole range of issues is important here” including cutting the reliance on US dollar for trade and building alternative payment methods with Russia’s own domestic currency Ruble.

“This is organizing convenient payment infrastructure in national currencies, establishing scientific and technological ties and, of course, increasing the capacity of logistics chains, increasing their efficiency, and creating new routes for cargo transportation,” the president of the Russian Federation Vladimir Putin told the Duma.

Putin emphasized that the strategic significance of such arrangements “has increased significantly” in the recent months as Moscow vouches to “completely remove” US Dollar assets from its National Wealth Fund. Moscow recently scrapped implementation of the contracts with the EU for gas supplies asking the “unfriendly countries” to pay in Rubles instead of transacting in dollars.

While a host of European countries objected to Putin’s new orders, citing the clauses in the existing energy contracts that required them to pay in euros or dollar, many still dependent on Moscow for energy supplies met Russia’s demands. The move has stabilised Russian currency as Putin took a hit from unprecedented Western sanctions.

Ruble became the best performing currency making a dramatic recovery as it soared 83 to the United States dollar in the recent weeks. It recouped most of its losses after tumbling to a record low of 139 on March 7. Russia’s currency dropped to 10% lower than its worth further in February as Putin launched Russia’s military operations in Ukraine.

While the US, EU and the allied nations imposed a barrage of sanctions on Moscow, designed to restrict Russia’s ability to acquire foreign currency dollars and euros, European countries still continue to buy Russian oil and gas, outdoing the insolvency risks for Russian economy. In May, Moscow completely swerved the financial crisis as its currency rallied and economic data improved.