Beggars: It’s time we give up our apathy 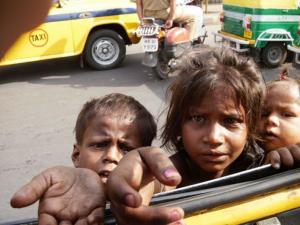 (Tufail Ahmed, a respected intellectual who is a director, South Asia Studies Project, The Middle East Media Research Institute in Washington, has written an open letter to Prime Minister Narendra Modi on the issue of “begging” on Indian streets. NewsBred reprints this letter which should concern us all.)

I am writing to draw your attention to a problem that was never a feature of Indian civilisation. Like you travelled the length and breadth of India during your youth not knowing where your next meal would come from, I have travelled across India witnessing a saddening scene at bus stops and railway stations, in markets and outside restaurants, at traffic lights right in the middle of roads.

My heart cries when I see our daughters and sons – wearing torn clothes, no shoes or chappals in feet, living a hopeless life – stretching out their hands for a few coins, asking for a bottle of water, knocking on the doors of cars, pursuing foreign tourists to give a few coins, pointing to their mouth and stomach to say that they need to eat. The children who beg do so due to poverty, but they are also forced into begging by organized crime syndicates.

Now that you are the prime minister, as someone who rose from below, I see a realistic opportunity that you can eliminate this problem during your current term in office. Very humbly, I suggest the following measures that your government should take up and implement before the end of 2018.

i) A national fund be established specially targeted at children who are below 18 years of age and are found begging at traffic lights, bus stops, railway stations, or elsewhere.

ii) Each under-18-year child found begging in streets be picked up by police with or without the consent of their parents, and be enrolled in a residential school.

iii) For this purpose, each state be required to open exclusive schools for such children. Depending on the population size of the state, we will need 1-20 large residential schools in each state.

iv) We will need 600 to 1,000 schools, with possibly half of them to be vocational. The Ministries of Human Resources and Skills Development can jointly achieve this goal by 2018-end.

v) Younger children, e.g. those below 10 years, must complete a CBSE-mandated syllabus from Grade I to XII. Children who are nearing 18 years be given vocational training to enter adult life.

Beggars were never part of Indian civilisation. As the PM, you have an opportunity to eliminate begging from our nation’s life. Your personal initiative Swachh Bharat has generated tremendous public awareness. You can eliminate begging in a time-bound manner. The suggestions I have outlined above can be amended and refined, as the government has better resources to arrive at correct figures and appropriate measures. I am merely pointing to a step forward.

It is my understanding that the government has no shortage of funds to achieve this objective before the end of 2018. The people of India have responded to each of your messages in a positive way. For example, more than one crore Indians have given up LPG subsidy at your call. I am sure that even if you were to author a tweet requesting people’s help in a mission to eliminate begging from India, our business houses, temples and common Indians will respond with enthusiasm.

Your official website tells me that you are “inspired by the principle of ‘Antyodaya’, of serving the last person in the queue.” I hope that my message reaches your ears.