Behind the palm oil on your supermarket shelves: Tales of rapes and slavery 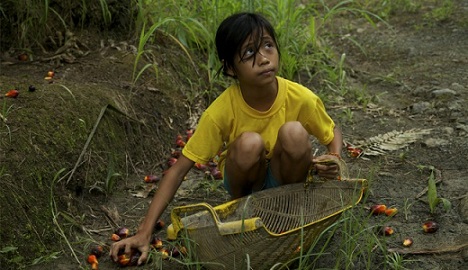 Sixteen-year-old, with no one around her, was working on a palm oil plantation when she heard something. She paused. It’s nothing, she thought. She resumed working.

Suddenly there was a large man behind her – old enough to be her grandfather – his hand clamped tightly over her mouth and started pawing her breasts, throwing her to the jungle floor.

Afterward, he held an axe pressing to her throat to warn her: Make a move and I’ll kill you, DO NOT TELL!

At another plantation, hundreds of miles away, another woman, Ola, complains of fever, cough, and nose bleeding after years of spraying dangerous pesticides with no protective gear. Making just $2 a day with this work, she cannot afford to see a doctor.

These were stories of just two women among millions of daughters, mothers, and grandmothers working at major palm oil plantations in the parts of Indonesia and Malaysia, that feeds into some of the world’s best-known cosmetic brands, facing various forms of exploitation including the most severe one’s– child labour, slavery, and rape.

Malaysia and Indonesia produce approximately about 85% of the world’s estimated $65 billion palm oil, one of those ingredients which are often hidden amid a list of scientific names on the label but is a part of roughly more than half of the products kept on the shelves of the supermarket and in some of the world’s largest cosmetic brands.

An Associated Press Investigation claims that millions of laborers from some of the poorest regions of Asia, working to produce palm oil, are exploited with allegations of rape, outright slavery, and human trafficking.

The interview included more than 50 women and girls from at least 12 companies across two nations.

With an estimate of over 7.6 million women working in the field, they form the backbone of the Indonesia palm oil industry, the biggest in the world. In Malaysia, which is much smaller than Indonesia, it becomes slightly difficult to get an exact number because of the large numbers of foreign migrants working off the books.

Burdened with some of the most difficult jobs including spending hours in water filled with chemicals and carrying such heavy loads that, over time, their wombs can collapse, women over generations from the same families working in the plantations.

A half-century ago, palm oil was just another commodity that thrived in the tropics. Many Western countries relied on their own crops like soybean and corn for cooking, until major retailers discovered the cheap oil from Southeast Asia had almost magical qualities. It had a long shelf life, remained nearly solid at room temperature and didn’t smoke up kitchens, even when used for deep-frying.

It’s used in baby formula, non-dairy creamers, and supplements and is listed on the labels of everything from peanut butter to Kit Kat candy bars. It bubbles in shampoo, foams in Colgate toothpaste, moisturizes Dove soap, and helps keep lipstick from melting.

It’s easy to understand the allure but the convenience comes with a cost: For workers, harvesting the fruit can be brutal.

With the continuous increase in the relentless demand, companies constantly require new workers and as men usually take up nearly all the full-time permanent positions, it comes to women- who are often considered as casual workers hired for the day to day jobs with pay never guaranteed. They often work without pay to help their husbands meet otherwise impossible daily quotas.

Hotler Parsaoran of the Indonesian nonprofit group Sawit Watch, which has conducted extensive investigations into abuses in the palm oil sector says, “Almost every plantation has problems related to labour, but the conditions of female workers are far worse than men.”

The conditions are so bad that women, sometimes, are forced to objectify themselves to pay back their loans because whatever they earn from plantation struggle is hardly enough to cover even their basic costs. Younger females were intentionally given less demanding jobs, with sex expected to change

Some women are forced to undergo humiliating checks to prove they are bleeding in order to take leave during their periods.

These conditions of women workers present the stark contrast and hollowness of the top industry leaders such as L’Oreal one of the world’s top cosmetic companies, and Unilever, one of the biggest palm oil buyers for consumer goods, who believe to promote women empowerment message.

L’Oréal which says it is working to stamp out sexual harassment “because we are all worth it” chooses to remain silent on the matter.

Estee Lauder Companies Inc., owner of Clinique and Aveda, when asked whether specific products used palm oil or its derivatives, there was no response.

Meanwhile, Indonesia has laws to protect women from sexual abuse. But the reality seems to differ. Despite a national health care program launched by the Indonesian government, many palm oil workers still don’t have access to basic medical services. The nearest clinic available for them is more than a day’s drive!

Amid all this, while the Indonesian government has at least acknowledged the problem, the Malaysian government, on other hand, has said that they haven’t received any reports about rapes on plantations so had no comments.

(This is an abridged version of the piece which appeared in international news outlets).