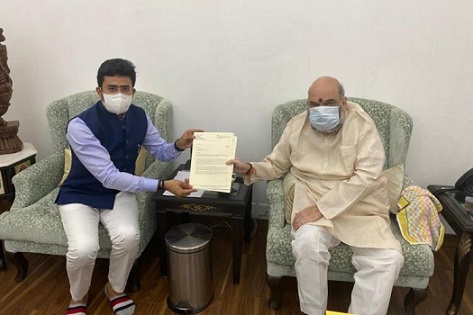 On Sunday, in his meeting with Union Home Minister Amit Shah, he has requested him to form a permanent division of the National Investigation Agency (NIA) in the city.

Tejasvi said that he had met Home Minister at his residence and stressed upon the need of well-equipped and sufficiently staffed NIA office to control the terror-related activities in the city. he also mentioned that Mr. Shah has assured him that it’ll be set up soon.  He said the violence in Bengaluru where police stations were attacked wasn’t spontaneous rather a conspiracy.

“In the last few years, Bengaluru, the Silicon Valley of India, has become the epicenter of terror activities. It has been proved through many arrests and sleeper terror cells busted by the investigative agency in the city” Surya told the reporters.

Earlier, Law and Parliamentary Affairs Minister JC Madhuswamy also said that the Bengaluru riots were pre-planned and rejected the allegations of the Opposition party.