Bharat Bandh: If Opposition can’t justify it, why blame if you are called anti-national? 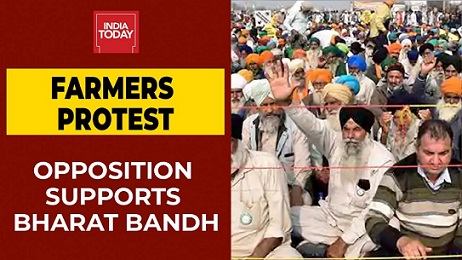 Sometimes I feel sorry for Yogendra Yadav. I mean the man tries so hard to be a voice of India’s farmers. He dresses himself as one, with headgear and all, and is even a founding member of the Jan Kisan Andolan. But he was not allowed inside Vigyan Bhavan as a representative of the farmers. And now that every tom, dick and harry is rooting to make “Bharat Bandh” a success on Tuesday, the man doesn’t find his name in that list too.

Have a heart Yogendra. Being ignored is a far better position to be in than being dealt with contempt. And that, my readers, you should’ve in unreserved tonnes for the Opposition which, like ants do, are trying to move a piece of jaggery to their habitat which they of course could hollow out but can’t even get under.

Let’s look who this Opposition is. Name anyone you could think of and they are in the list (well Mayawati isn’t it). The joint statement in support of farmers’ call for Bharat Bandh includes the signature of Congress, NCP, RJD, Left, SP etc. Arvind Kejriwal, Mamata Banerjee and KC Rao—AAP, TMC, TRS—have lent their support. Shiv Sena had thrown their hat in the ring far in advance.

What these Opposition is in support of? Did you guess APMC and MSP? WRONG.

Or read about the manifesto of Congress ahead of the 2019 polls.

Or find out the fierce resolve of Bharatiya Kisan Union.

Did you say Left is in support of APMC? Well, commies in Kerala don’t have one and even don’t want one.

Listen or read about the links I have offered. All are saying the same thing which the Modi government has now done. Unlike the Centre, they aren’t subtle too. They have time and again vowed to free the farmers from the clutches of the biccholyein (middlemen).

But now they can’t find any good in Farm Acts 2020. They have racked their brains and come out with a plausible explanation. That not even deliberation was done before the farms bills (proposed on September 14, 2020) were turned into Acts (September 27). Indian Express stresses it today with all graveness at their command. The prepaid media won’t tell a few bare facts:

In 2017, the Central government had released model farming acts. In 2019, the Standing Committee on Agriculture noted that states were not implementing them, especially the APMC ones. A further committee was set up of seven chief ministers in July 2019. Accordingly, the ordinances were promulgated in the first week of June, 2020.

So what next? Harp Adani-Ambani to justify your support for Bharat Bandh. Now do you mean to say that Adani and Ambani would’ve factories where they would grow wheat and paddy? Or that they have eye on your land which is not even yours’ but largely grabbed? Show me the part in Farm Acts which shows private players would hold Indian farmers to ransom and there is not enough mechanism to prevent it.

The only reason for Opposition support to Bharat Bandh is to show that the present farmers’ agitation is more than just Punjab. That the entire farmers of the nation are against it. To make it appear broad-based. So that the likes of shameless Justin Trudeau, who supports the agitation on one hand and opposes it on the other at World Trade Organisation (WTO) forums, could preen on camera: See, didn’t I say it?

We would read reports and see images in our newspapers with Kochi, Kolkata, Mumbai, Jaipur datelines showing how great a success Bharat Bandh was. Life would be disrupted, emergencies would go unattended due to this set of rogues. The experts say India loses Rs 25,000 crore on a typical Bharat Bandh. And they would still bristle if you call them anti-national.