Biden calls a Fox News reporter “What a stupid son of a b..tch” 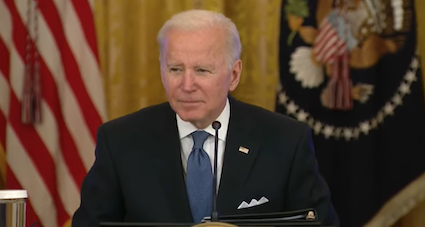 US president Joe Biden snapped at a Fox News report with an abuse: “What a stupid Son of a b…ch”—on Monday when quizzed over inflation at the White House during an event.

Fox News reporter Peter Doocy asked, “Do you think inflation is a political liability (ahead of the midterms)?” Instead of answering the question posed to him, Joe Biden went on to abuse the journalist. “That’s a great asset. More inflation. What a stupid son of a b**ch (SOB),” he was heard as saying.

CNN’s Kaitlan Collins has reported that Biden’s expletives are included in the official White House Transcript.

This is however not the first time when Peter Doocy and Joe Biden had a verbal spat in the White House. In August last year, Doocy asked Biden if he was willing to take any responsibility for the Afghanistan crisis. “Mr President there had not been a US service member killed in combat in Afghanistan since February of 2020. You set a deadline, you pulled troops out, you sent troops back in, and now 12 Marines are dead. You said the buck stops with you. Do you bear any responsibility for the way that things have unfolded in the last two weeks?” he inquired.

Joe Biden, who kept Doocy waiting till the end, fumbled as he was pressed with a tough question. At about 1:27 minutes into the conversation, he went on bend his head, close his eyes and rest his hands on the podium. His gesture was widely criticised by the netizens for showcasing the US government’s weakness and incompetence in dealing with the situation.