BJP hopes for seats in double figures from ruling allies AIADMK: Cong not having way with DMK yet 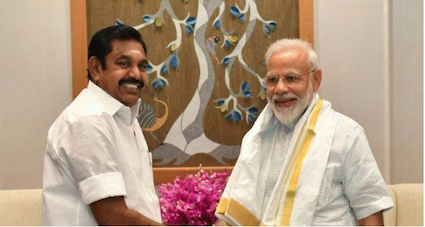 How many seats would Bharatiya Janata Party bag from its ruling allies All India Anna Dravida Munnetra Kazhagam (AIADMK) to contest in the forthcoming assembly polls in Tamil Nadu? As per its state president L Murugan, they are good enough for double digits— though the exact number is expected to be announced in a day or two. They recently had a meeting with the Union home minister Amit Shah.

With less than a month left in the assembly elections, the AIADMK and its chief rivals, Dravida Munnetra Kazhagam (DMK) have commenced the talks for sharing seats with its allies, intensifying the dynamics of politics in the southern state.

Desiya Murpoku Dravida Kazhagam (DMDK), once a sought-after party in Tamil Nadu, now seems to be trying all tricks in the book to get a decent deal for itself ahead of the assembly elections in the state. According to sources, leaders for both the AIADMK and DMDK met on Tuesday to discuss the seat-sharing and the AIADMK has offered them 10-15 seats for upcoming elections. Representatives of the AIADMK, comprising state ministers P Thangamani, SP Velumani and AIADMK deputy coordinator KP Munusamy, called on DMDK chief Captain Vijayakanth at his residence in Chennai to discuss the seat sharing after the latter threatened to go solo and exit the alliance with AIADMK for the Assembly elections.

Sources have also revealed that DMDK had asked AIADMK to allot the same number of seats given to Ramadoss-led PMK to which the ruling party hesitated. The string of poor performances of DMDK in elections and constant locking horns by DMDK treasurer Premalatha Vijayakanth with her alliance partners can be one of the prominent reasons behind AIADMK’s hesitation. The party secured 29 seats in the 2011 elections and positioned itself as the state’s main opposition party, but lost its way over the years. In the recently held Lok Sabha elections, it hit a new low by securing just 2.19 per cent of the vote share in the state.

Meanwhile, R Sarath Kumar, founder of All India Samathuva Makkal Katchi (AISMK) who had been in alliance with the AIADMK has decided to opt out and likely to contest elections in the formation of a third front.

On the other hand, DMK is also strategizing to make a strong comeback. The party has also started its talk on seat- sharing. While the party signed a seat-sharing deal with the Indian Union Muslim League (IUML) and Manithaneya Makkal Katchi (MMK), apportioning them three and two seats, respectively, it has failed to make any negotiation with the Left and Congress. The DMK has made it clear that the party can offer only 18-20 seats to the Congress, who is expecting nothing less than 35.

DMK seems to be in no mood to offer the seats to its allies as per “their choice” and l IUML national president M Kader Mohideen informed about the same during his meeting with reporters.

“We agreed and signed the deal for three seats after the DMK said they are not in a position to allocate more seats as many allies have to be accommodated,” Mohideen told reporters.

It must be said that AIADMK faces an uphill battle against DMK who bagged 38 of 39 parliamentary seats in the 2019 General Polls. In the 2016 assembly polls, had bagged 136 out of 234-seat assembly. DMK share was 89. But then the supremos of the two parties, J. Jayalalithaa and M Karunanidhi, both were alive.