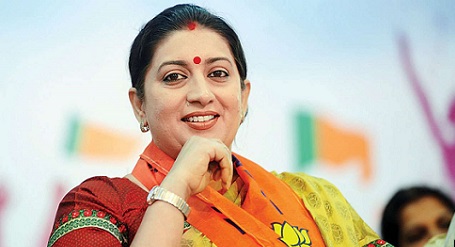 Smriti Irani is busy canvassing support for the BJP candidates in District Development Council (DDC) elections now on in Jammu and Kashmir. The Union textiles minister did not hold herself back as she targeted the “Gupkar Gang” and contrasted it with the virtues of her own party at some public meetings in the Jammu region on Friday. She said these Gupkaris have for generations together bothered only about their own progeny and ignored the masses.

“Gupkar Gang” is a pejorative appellation reserved for leaders of parties like the National Conference (NC), the People’s Democratic Party (PDP), People’s Conference (PC) and four others which have formed People’s Alliance for Gupkar Declaration (PAGD). A good number of the leaders affiliated with these parties are visible in politics because of their dynastic credentials.

She said the DDC polls were happening because of the BJP as “Gupkar Gang” leaders did nothing to strengthen grassroots democracy. In contrast, the Central government led by the BJP has transferred unlimited funds to stakeholders and it tries to reach all sections of society. The crowds responded enthusiastically as she spoke about gas cylinders becoming easily available for ordinary people. She also spoke about many other welfare schemes of Narendra Modi government.

Her direct style, ability to speak with clarity and speaking extempore with authority make her the star campaigner that she is billed as. It is intriguing why she and some other BJP leaders like her, good orators, be it Nitin Gadkari or Rajnath Singh, are not seen among public more often? Usually, Modi, Amit Shah and Yogi Adityanath tour different areas of the country, campaigning for the BJP.

Even in the recent legislative assembly elections in Bihar, very few BJP leaders campaigned. Why? What was the strategy the party was following when it held back its fire, with Modi alone campaigning in some places? In J&K, several Central BJP leaders have made rounds of different DDC segments already in the first three phases.

MOS Anurag Thakur, Shahnawaz Hussain, Mukhtar Abbas Naqvi, General V K Singh (retired), Himachal Pradesh CM Jairam Thakur, Dr Jitendra Singh and Tarun Chugh have already made campaign speeches in both regions of the Union Territory (UT). Some others are expected to campaign for party candidates within the next fortnight.

We were perhaps offered the clue in recent Greater Hyderabad Municipal Polls too. BJP threw in Smriti Irani in the mix here too. There was also Tejasvi Surya. It does make no sense to keep holding your best communicators under wraps.

Opposition parties have been quick to point out that even in DDC polls, the BJP is invoking the name of Narendra Modi time and again. These are local polls for grassroots institutions as per the BJP, these leaders point out. If that is true, why are local issues absent from these polls, and why Modi’s photos are on campaign posters? They ask rhetorically and answer themselves: The local BJP leaders are riding on Modi’s performance always. Will Modi sort out local development needs? Will he come to Rajouri, Kishtwar or Baramulla and Bandipora to sort out things at the grassroots?

The local BJP leaders have no answers to these posers. Incidentally, in legislative assembly elections in late 2014, the BJP had won 25/87 segments. At one time, it had 25 MLAs and 11 MLCs but none of these faces are easily recognisable faces. Leave aside going beyond their own constituencies, they have failed miserably to establish a good rapport with their own voters even. That is something which the NC, the PDP and the Congress, besides others in the fray, mock the BJP about.

Is it the beginning of delegation of electoral responsibilities to leaders other than the known troika of Modi, Shah and Yogi?