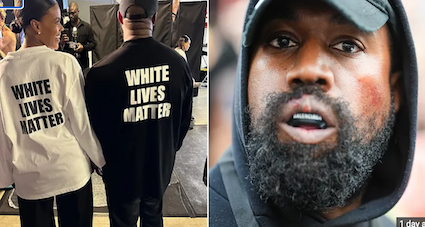 Kanye West, the US rap star known for courting controversy, has stoked a new wave of outrage, accusing Black Lives Matter of being a “scam” after he provoked online pushback by wearing a “White Lives Matter” shirt.

“Everyone knows that Black Lives Matter was a scam,” the 45-year-old entrepreneur said on Tuesday in a since-deleted Instagram post. “Now it’s over. You’re welcome.”

The statement was apparently a response to criticism that West received after wearing a “White Lives Matter” shirt on Monday at his Yeezy fashion show in Paris. The show showcased Yeezy’s new clothing line and featured models wearing shirts emblazoned with the controversial counter-BLM slogan. For good measure, West was photographed alongside black conservative firebrand Candace Owens wearing matching shirts with “White Lives Matter” printed on the back and a picture of the Pope shown on the front.

“Kanye West decision to wear a ‘White Lives  Matter’ shirt is disgusting, dangerous and irresponsible,” black author and professor Marc Lamont Hill said on Twitter. “Some of y’all will rush to defend him. You should ask yourselves why.”

Rapper Jaden Smith, son of actors Will Smith and Jada Pinkett Smith, walked out of West’s fashion show in protest. “True leaders lead,” Smith said. “I don’t care who it is. If I don’t feel the message, I’m out. Black lives matter.”

BLM has been plagued by financial scandals. For instance, the new leader of the national BLM not-for-profit organization, Shalomyah Bowers, was accused in a lawsuit of siphoning off more than $10 million in donor fees to pay his consulting firm. BLM co-founder Patrisse Khan-Cullors went on a real estate buying binge last year, purchasing four homes for a combined $3.2 million. She also was accused of paying her brother and her child’s father more than $1.8 million combined for providing services to BLM. The group received more than $90 million in donations in 2020.

West, who now goes by the name “Ye,” ranks as the world’s richest rapper with a fortune estimated by Forbes at $2 billion, based largely on his Yeezy fashion brand. He has frequently generated controversy, such as when he visited then-President Donald Trump in the Oval Office in 2018 and said in an interview that same year that slavery was a “choice” for black Americans.