Capital woes of garbage in India 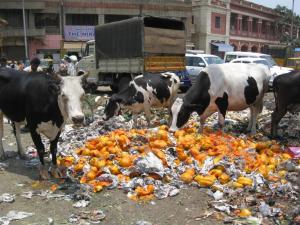 The striking municipal employees of Delhi this week relented after the high court intervention but it appears only a pause before it drops its broom again on rulng Aam Aadmi Party (AAP). Typically, AAP sees the role of Bharatiya Janata Party (BJP) and its control of Capital’s civic agencies behind this mess at their door.

Mess literally is at every door. In Delhi, Mumbai, Bangalore, Ludhiana, Pune—name any city and any town. Strikes only put the pictures in front of our eyes which we feint, dodge, duck, skirt, nose-block or sprint everyday in front of proverbial dhalaos (proverbial garbage dump in our neighbourhoods). Now that you can’t evade the headlines, pictures, putrid smell or rotting garbage on Capital’s streets, and are pinned to the wall, brace for a knock-out punch.

India generates 62 million tonnes of trash every year by its nearly 400 million people living in urban India, now the world’s third-largest garbage accumulator. The World Bank sees a 240 percent rise in it by 2026. Now hold your breath (pun intended), nearly 45 million tonnes of it is untreated. Put it this way, it amounts to nearly 3 million trucks which, if laid in a row would scale half the distance between the earth and the moon.

So let’s take a closer look at this mounting shit. Delhi and Mumbai  (10,000 tonnes of garbage every day) are obviously top of the heap but lesser towns are no less alarming. Ludhiana has crossed a 1,000 tonnes of waste a day and so has Nagpur or Indore. And all of this doesn’t include the industrial waste. Rapid economic growth, flight to cities, overcrowding, pathetic urban planning, corruption, all have taken a heavy toll.

Last month, Mumbai was wrapped in toxic smog for days. So bad was the air quality that schools were ordered close. It so happened that Deonar, one of Mumbai’s biggest landfills, had suddenly caught fire. It receives 5,000 tonnes of waste every day.

Deonar, Brihanmumbai Municipal Corporation (BMC) claims, would be shut down this year. The landfills in Gorai and Chincholi Bunder have already been closed due to over-use. Same is true of Mulund which is facing a closure.

In Delhi, the waste was dumped into four landfill sites. Three of the four landfills stopped working, so overflowing and hazardous, fire or otherwise, it were. These landfills were extended over 164 acres which is four times less than required area of 650 acres according to a 2011 report by the Central Pollution Control Board (CPCB). So bad is the situation that even some dhalaos can’t be emptied in the space of a week.

Bangalore onwards. Mandur, at 153 acres, is one of the most controversial landfills of the city. The entrance to the city was blocked by its residents in 2012. They claimed that landfill was poisoning the local water supplies.  Police intervened and dispersed the protestors who then went on a hunger strike. The state government finally intervened and ordered it to be closed.

In August 2012, more than 5,000 people, women, schoolchildren, kids, defied the police in Vilappil, a small village about 15km from Kerala’s captail, Thiruvananthapuram, to protest against a waste treatment plant. Again, the protest was on the contamination of the groundwater. Since then they have moved the Kerala High Court who have referred the matter to National Green Tribunal.

The story of these landfills is horrific in its own account. Not all garbage is collected—only 68 per cent of it by the municipal authorities. Only 28 percent of it is treated. There is no waste segregation system.  It means waste is burnt without separating biodegradable waste from non-biodegradable garbage. A lot of wet waste decomposes. It’s prime habitat for rodents and mosquitoes that spread malaria and dengue. We already know of the contaminated water. The stuff that rots catches fire. Rising smoke fill the air—half of which is deadly methane. Drains are blocked which cause floods. Air and water pollution leads to diseases and a great strain on health infrastructure. According to World Health Organisation (WHO), 22 types of diseases can be prevented in India if waste is managed well.

What’s worse, 50 percent of the biodegradable waste could be turned into compost which could support farming. Untapped waste could generate enough power to meet the demands of a small union territory like Pondicherry. Segregation could keep plastics, paper and glass apart. Plastic waste is a crucial fuel for energy plants.

Rules exist but are hardly enforced. For example, a rule states that “landfills should not be near habitations.” What’s near is undefined. So the Deonar site is less than a kilometer away from the nearest residential colony. The rules want scrap-dealers and rag-pickers to be stake-holders in the clean-up operation. But rag-pickers hardly have designated spaces to sort out the rubbish. There is no protective gear against hazardous dumps.

There are some admirable actions on the sidelines though. In Bangalore, there is a non-profit organization called Daily Dump which moves from door-to-door and advocate the waste segregation. They organize a “Trash Trail” which is a nine-hour “expedition” on foot and by van through the city’s waste fields.

Blaming authorities is convenient. The infrastructure has aged. Citizens have their hands soiled with blame too. Most still like to dump their waste away from home, rather than in front of it for easy pick-up.

The Modi government has set its sight on “Swachh Bharat Abhiyan (Clean India Mission). It aims to collect, process, dispose, recycle and generally manage the garbage in over 4000 Indian towns among other things. This ambitious scheme is of around $10 billion.

Just for facts, China and United States create a higher amount of waste than India. Organization for Economic Cooperation and Development (OECD) countries create half of world’s garbage. An average person creates waste of around three times his own weight each year.