Central Vista to have an ‘iconic structure’ bigger than India Gate 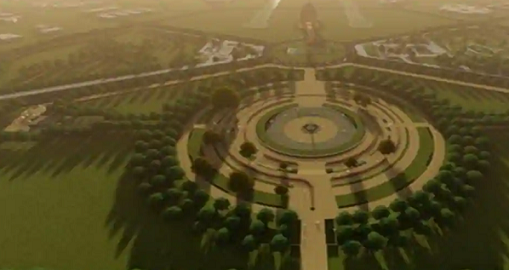 The Central government has announced its plan to build an “iconic structure” inside the proposed Nav Bharat Udyan (New India Park) on the bank of the Yamuna river in Delhi to mark the 75th year of India’s independence. This structure will be the final part of the mega Central Vista redevelopment project and a realization of the “new India” vision.

The government added that the structure should be timeless like Ashoka’s edicts and the Iron Pillar in Qutub Minar complex, aspirational and indigenous.

This “iconic structure” could well be bigger and better than India Gate which, despite its magnificence, is a symbol of our Colonial masters of the 20th century.

The structure should signify the unity in diversity and aspirations of “New India- clean and free from poverty, corruption, terrorism, communalism, casteism”

The maximum permissible height is 134 meters from the ground level which is three times the height of India Gate. The design should only use indigenous material as a part of Atmanirbhar Bharat and have to take factors like soil stability, wind velocity, seismic forces, and vulnerability to flooding, etc. into consideration as per the National Building Code of India, 2016.

Under this Centra Vista project, it’s been proposed that the existing 2.9 km from the Rashtrapati Bhavan to India Gate would be extended till the Udyan, or garden.

“Spread over 20.22 acres, Nav Bharat Udyan will be open to the public and is being designed to have an iconic structure and infotainment facilities such as Sphere of Unity, Milestones Walkway, Journey of India, Tech Dome, Amphitheatre, public amenities, etc. to showcase India’s rich historical and cultural heritage, scientific achievements, and will symbolize unity in diversity and aspirations of the New India,” a government statement read.

The Ministry of Housing and Urban Affairs said that the Central Public Works Department is holding a competition “to crowdsource implementable ideas for the conceptual architectural and structural design” of the structure from today. The last date for submitting entries is December 11. The winner, judged by an eminent jury, would be awarded with Rs 5 lakhs.

“The iconic structure can be a tower or a sculpture “or any other built form but not a building to be occupied”, the government said.

Architects, architectural firms, students, student groups, architectural or planning schools/colleges and other institutions across India, or any combination of the above can take part in the competition. Five commendation prizes of Rs 1 lakh each will also be given.

The Central Vista redevelopment project, the country’s power corridor — envisages a new triangular parliament building, a common central secretariat as well as revamped Rajpath. The Parliament will be internally restructured to accommodate many more legislators. However, there will be no external changes to the Parliament facade.

Gujarat-based company HCP Design, Planning and Management Private Limited had won the contract for the drawings of the project in October last year.

According to the Central Public Works Department, (CPWD) the Central Vista redevelopment project is likely to be completed by August 15, 2022.