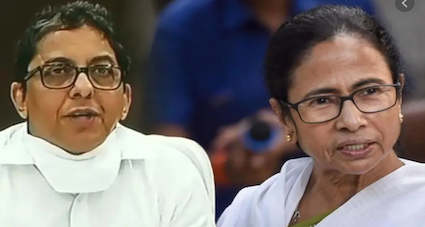 The Centre on Tuesday issued a show-cause notice to former West Bengal chief secretary Alapan Bandyopadhyay asking him to explain the reasons for skipping a meeting chaired by Prime Minister Narendra Modi.

The Center has also has invoked section 51(b) of the Disaster Management Act, punishable by imprisonment of up to two years or a fine or both against him The section pertains to “punishment for obstruction” for refusal to comply with a direction given by the Central government.

In another letter, the Centre has asked Bandyopadhyay, a 1987-batch IAS officer of West Bengal cadre, to report to New Delhi at 10 AM, Tuesday but he didn’t report and according to sources in the government, the Centre had started disciplinary proceedings against the officer

An FIR can also be filed against him if he fails to reply to the show-cause notice within three days.

Bandyopadhyay who was directed to report in Delhi in an earlier order on Monday opted to retire and later the West Bengal chief minister Mamata Banerjee appointed him as her adviser for three years.