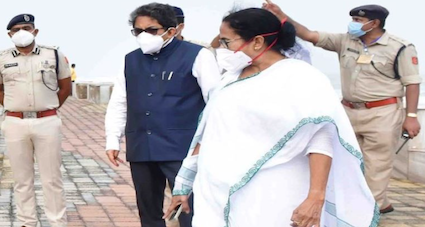 Gloves seem to be coming off. In response to West Bengal chief secretary Alapan Bandyopadhyay being asked to depute back to Department of Personnel Training (DoPT), chief minister Mamata Banerjee today appointed him as the Chief Advisor to herself. Only, its learnt that Bandyopadhyay would face a chargesheet nevertheless and action would be taken against him, sources in Centre said.

Mamata stated on Monday that since Alapan has retired today on May 31 from his service, he is not going back to join in Delhi. Instead, Mamata Banerjee said she had ordered the chief secretary to join immediately as the Chief Advisor to the CM for a period of three years.

Mamata’s move came after the Centre had issued a showcause notice to the IAS officer after the latter failed to report to the North Block at 10.30 a.m this morning. Mamata’s move was intended to make Alapan fall outside the purview of DoPT’s ambit now that he has retired. But, as said, the Centre is nevertheless going to chargesheet him.

The Chief Secretary was present at the state secretariat ‘Nabanna’ even on a Sunday and is also said to have attended a review meeting chaired by the CM earlier on Monday.

Mamata said in a press conference on Monday that Alapan wrote to her, stating that the purpose of his extension is not served. The Bengal chief minister claimed that the Centre couldn’t issue such an order without taking the State into confidence.

Mamata Banerjee, in a five-page letter to prime minister Narendra Modi, opposed the Centre’s move and claimed that she won’t release Alapan during the current “critical hours.” She also asked Modi to withdraw, recall, reconsider and rescind the order.