China groaning under Pakistan’s deadweight; CPEC is a millstone around neck 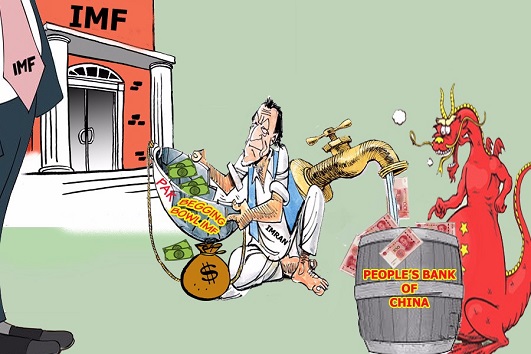 China invested the world over in its Belt and Road Initiative (BRI) projects in countries to debt trap them. In our neighbourhood, Sri Lanka is a prime example of this peculiar style of aggressive Chinese investments. In Pakistan, projects under China Pakistan Economic Corridor (CPEC) were/are not very different, meant to turn it into a vassal state.

China, however, needs Pakistan today to keep India unsettled on its western borders as it nibbles on the eastern side. Besides, the access to Indian Ocean/Arabian sea for its strategic and energy needs. As such, it is muted about the returns on its investments on various CPEC projects. However, there are indicators that the Chinese banks are not willing to invest more money in CPEC projects.

Why? Why doesn’t China want to put more money in CPEC now that substantial sums have already been spent? The simple answer is it sees no way of recouping its investments. In banking terms, it is clear that these are virtually NPAs (Non Performing Assets).

What is the estimated cost of various CPEC relationship projects now? According to some estimates, these projects could cost as much as $62 billion.

Recently, Wall Street Journal (WSJ) carried some reports about Chinese investment patterns worldwide. Most of these reports painted a gloomy picture about RoI (Return on Investment) for these, something no commercial bank can compromise on. Profitability or a good RoI is what is paramount consideration of all such banks, and the Chinese are no exception.

Leave aside low RoI, there are chances that even the recovery of principal amounts spent by China may be in jeopardy given the dire economic straits Pakistan is in. This has stalled further investments in CPEC projects, needed for their completion.

Some weeks ago, China gave $1 billion to Pakistan so that it could return the same to Saudia Arabia. This was a loan taken by Pakistan to repay another loan, taking from the Chinese to repay the Saudis! This is only slightly different in essence from “Robbing Peter, To pay Paul”!

During the last financial year, Pakistan had received loans worth over $13 billion, substantial sums for its economy. However, of this amount, no less than $10 billion was utilised for repayment of loans taken earlier. The souring of relationship with the Saudis and their refusal to supply oil to Pakistan on deferred payments can only worsen the situation.

Beyond a point, however, Saudi Arabia is unlikely to push Pakistan as it may then embrace Iran! A new emerging China-Pakistan-Iran axis doesn’t suit Saudis and this is likely to lead to some nuanced diplomatic moves in the West Asia.

Right from its birth, Pakistan has played its geographical location to its advantage, making little, if any efforts, to be self-reliant in any sphere. Outright grants, soft loans, often never to be returned, loans from International agencies et al have been cornerstones of the policies it has pursued! For several decades, the US money kept it afloat and now it is the Chinese injections which is allowing Pakistan to keep its head above swirling waters of economic doom. The drying up of funds’ flow from China can mean only one thing: Further cost escalations.

Pakistan Foreign Minister Shah Mahmood Qureshi had visited China some days ago to discuss bilateral issues. It is unlikely that the issue of further investments in incomplete CPEC projects was not taken up during these parleys. However, the lack of any official communication afterwards regarding any commitments from the Chinese indicate that no headway could be made on the issue.