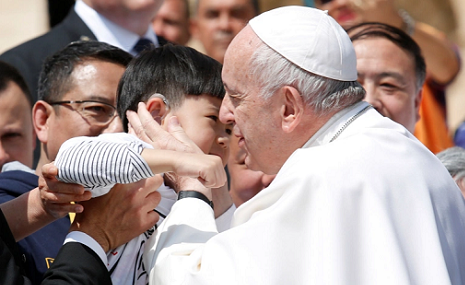 China has termed a comment made by Pope Francis that Uighurs were a “persecuted” community as “groundless”. The Pope has made the comment regarding the ethnic minority Muslims in a book. The comment may impact the relationship between Vatican and China going by the manner in which Beijing has reacted.

Officially, China has steadfastly denied any wrongdoing and crackdown against the Uighurs. This despite the fact that there is enough evidence available in the public domain now contrary to the official stance of the Chinese authorities.

In his book “Let Us Dream: The Path to a Better Future”, Pope Francis has named “the poor Uighurs” among other people he kept in his prayers. At one place in the book, he writes: “The Rohingya, the poor Uighurs, the Yazidi – what ISIS did to them was truly cruel – or Christians in Egypt’s and Pakistan killed by bombs that went off while they prayed in church.”

Chinese Foreign Ministry spokesman Zhao Lijian said that Pope’s words had “no factual basis”. He also said that the Chinese government has “always protected the legal rights of ethnic minorities”.

The Vatican, the supreme seat of Catholic Church, is trying to establish some agreement with China on church operations there. It was only last month that an agreement on appointment of Roman Catholic bishops was renewed.

For several decades earlier, the question of making appointments of bishops had remained unresolved. Beijing has formally recognised Pope’s authority within the church, and Vatican has recognised the legitimacy of bishops appointed by China.

The Vatican has appointed a third bishop in China under this agreement recently. The continuation of the mutual recognition agreement is seen as being critical to diplomatic ties between Beijing and the Vatican. Incidentally, the ties had snapped when the Communist Party came to power.

There has been widespread criticism of the Chinese policy of the mass internment and re-education camps for the Uighurs. Travel restrictions and surveillance has also been in place aimed at keeping Uighurs on a tight leash.

“In China, the Uighur Muslims are facing what amounts to some of the contemporary world’s worst mass atrocities,” Cardinal Charles Maung Bo had said in July. Cardinal Bo is the archbishop of Yangon, and the president of the Federation of Asian Bishops’ Conference.

Before the comments in the book widely known, the Pope had remained silent on atrocities against the Uighurs.

Pope Francis has said that the church needs to go to the margins to see life as it really is. “I’ve always thought that the world looks clearer from the periphery,” he said in the book.

The Pope has also discussed social behaviour that he deemed as short-sighted and dangerous. Demonstrations against wearing masks, restrictions on large gatherings etc were specifically mentioned by him. “It is too easy for some to take an idea, personal freedom here, and turn it into an ideology,” he said.