China is fortifying, making most of India mired in Covid-19 surge 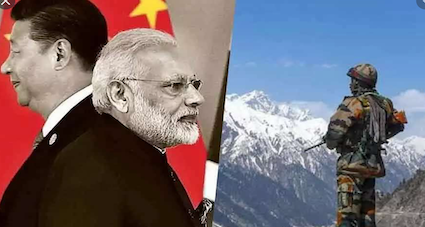 In 2015, China announced that a new village, called Gyalaphug in Tibetan or Jieluobu in Chinese, had been constructed in the southern part of the Tibet Autonomous Region (TAR). A recently published investigative Foreign Policy report by Robert Barnett explains, however, that Gyalaphug is within Bhutanese territory.

China has been quietly expanding its territorial reach throughout South Asia to maximize power and to constrain India’s role as the status quo power in the region.

Moreover, as India continues to be ravaged by the Covid-19 pandemic, its preoccupation with containing that disease has provided China with a golden opportunity to alter the region’s geopolitical architecture discreetly but effectively. Thus New Delhi must recalibrate its national and regional policies to address the deepening fault lines in South Asia.

In April 2020, the Communist Party secretary of the TAR, Wu Yingjie, visited the new village. He told the Tibetan residents to “raise the bright five-star red flag high.” Unreported outside China, the visit was filmed and broadcast on local television channels, making it seem that the construction of the village was just a normal activity within the recognized borders of China.

However, the fact is China was placing settlers, security personnel, and military infrastructure in territory internationally recognized as inside Bhutan.

China’s unilateral construction of roads, settlements and buildings within Bhutan’s territory contradicts the 1998 peace agreement signed by the two countries. That agreement promised to “maintain peace and tranquillity on the Bhutan-China border areas.”

The agreement was groundbreaking because of China’s explicit acknowledgement of Bhutan as a sovereign country. The agreement further stated that “China fully respects the territorial integrity and independence of Bhutan.”

What makes matters more complicated for Bhutan is that the area in which Gyalaphug lies is not just ordinary territory. Rather, it is in an area of extraordinary religious significance to the people of Bhutan.

That area is traditionally known as the Beyul Khenpajong. It is one of the most sacred locations in Bhutan. Unfortunately, China does not seem to recognize the gravity of its actions on sacred Bhutanese territory.

In fact, it is speculated that China does not actually need the land it is settling in Bhutan; rather, it aims to coerce the Bhutanese government into surrendering territory in other parts of the country to give China a strategic advantage against India. Gyalaphug now is one of three new villages China has constructed in northern Bhutan.

The government of Bhutan may be aware of the intrusions taking place in its territory; however, because of the clear power asymmetry vis-à-vis China, it seems to have taken a position of “disciplined silence.”

Meanwhile along the tension-stricken Line of Actual Control (LAC), China has also continued to cement its military presence. After the recent military disengagement in Pangong Tso in eastern Ladakh, China is now reinforcing its military positions and rotating troops along the LAC.

This clearly demonstrates the intention of the People’s Liberation Army to fortify its positions in territory disputed between China and India, while the latter has been preoccupied with domestic woes brought on by the pandemic.

Moreover, with the harsh winter weather receding, the PLA has been steadily converting the temporary structures, ammunition dumps, helipads and surface-to-air missile positions it constructed last year into permanent positions.

In early May, a senior Indian officer stated, “There is no fresh accretion of PLA troops on the front lines in eastern Ladakh. But China continues to maintain sizable forces in the areas to the rear of the friction points, while it reinforces military positions all along the frontier in the region.”

He added, “The Rutog Country area, which can act as a staging area for Pangong Tso since it is only around 100 kilometers away, for instance, has witnessed a lot of activity in recent days. The PLA, of course, can move forces much faster to the LAC due to better road and other connectivity.”

Moreover, on April 9, during the last round of talks at the corps commander level, China blatantly refused to pull back its troops from the Hot Springs and Gogra posts, which along with the Depsang Plains, remain critical friction points between the two Asian giants.

A highly placed source involved in the decision-making told The Sunday Express that at Patrolling Points 15 and 17A in that area, China “had agreed earlier” to pull back, but it “later refused to vacate” the area. Furthermore, according to the source, China said India “should be happy with what has been achieved.”

This has led to a growing belief in India that the Indian Army withdrew too soon. In addition, what was intended to be a crucial step toward a broader disengagement now seems to be quite questionable given China’s continuous expansion and power maximization to alter the status quo.

India must realize that in order to maintain the status quo in South Asia it will have to do three things: proactively engage with its neighbors, enhance deterrence along the LAC, and continue communication with China.

Engaging with neighbours is a critical key to fostering a secure and stable environment in South Asia. At a time when the international system is facing radical shifts in the distribution of power, forging close relations with neighbors is what India should invest in. This will allow an enhanced level of coordination and even conflict prevention if the need arises.

Regarding the need to secure the LAC by enhancing deterrence capabilities, a former national security adviser and foreign secretary, Shivshankar Menon, explains, “If you want to stop them from nibbling at the LAC and changing the status quo, you need to restore deterrence which we did partially around Pangong in August. You need to restore it across the line.”

Espousing a strong level of deterrence will allow India to maintain and secure its position along the LAC and lower the risk of a high-intensity conflict breaking out.

Last, standing up to China also means maintaining communication and dialogue in order to send clear signals and avoid strategic miscalculations. It would be ineffective to shut down lines of communication completely between the two countries; rather, by engaging on vital issues, especially though back-door diplomacy, de-escalation of tensions will be more viable.

(This piece is republished from Asia Times with gratitude).