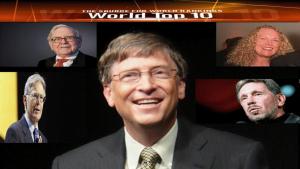 Imagine yourself in Davos, Switzerland today where world’s top corporations, celebrities and politicians have converged for the World Economic Forum.

You could see heads of Goldman Sachs, JP Morgan Chase enjoying a $1000-a-plate dinner with US vice-president Joseph Biden and Secretary of State, John Kerry. The bosses of Google, GM, Alibaba, Facebook have just crossed the floor to join Bill Gates who could have been congratulating the Greek prime minister, Alexis Tsipras for imposing the tough austerity measures on his people.

These rulers of the world have come together to herald the “Fourth Industrial Revolution.” But the conference also has “unemployment…energy prices…fiscal crisis…social instability…asset bubble…and inter-state conflict” on its agenda. The backdrop of China’s economy has only grey-ed the sky outside.

Additional matters are pressing: the threat of a global stock sell-off, collapsing commodity prices, cracks in European Union (EU) as well as growing war drumbeats in the Middle East, Eastern Europe and the Pacific.

Quite sadistically, these richie-rich are part of the problem. A report by the aid agency Oxfam shows that just 62 people hold as much money as the bottom half of the world’s population, i.e. 3.6 billion people of the world.  Till 2010, this figure was 388 people. Kudos.

The report notes: “Far from trickling down, income and wealth are instead being sucked upwards at an alarming rate.”

Most of the people Oxfam is hinting are around you in this opulent Davos conference hall. You could take an autograph or issue a ticket to them. You could remind them these 62 individuals that in a matter of five years, their wealth has increased by 44 percent –while the one of bottom half has fallen by 41 percent in this time stretch.

The report noted: “In 2015 the world’s wealthiest 80 billionaires had collective wealth of more than $2 trillion. Meanwhile, the wealth of the bottom half of the planet has fallen by approximately $1 trillion in the past five years.”

Every matrix imposed in the world order to wriggle out of the 2008 financial crisis has helped increase the riches of these billionaires while the vows to increase output, wages have just proved to be empty rhetoric by world’s financial regulators.

Oxfam itself has been surprised by this rapid transition which has come a year too early to its own prediction in 2015 that world’s richest 1 percent would’ve more wealth than the bottom 99 percent in a year’s time.

Tell these billionaires if you could though that they have nothing to be smug about this all.

The Chinese stock markets are crashing. Its government is buying much of its growth through massive issuance of corporate and household debt. Today, China has the highest private debt levels in the world and its servicing has ballooned from 12 percent of GDP in 2009 to 20 percent today.

With its attempt to shift its manufacturing base to domestic market could cost millions of jobs raising the spectre of “struggles of the working class.” In December alone, there were monthly records of 400 protests by Chinese workers.

Same is true of United States. It’s manufacturing base is in recession, or at least heading into one. Federal Reserve itself says that but for cars and aerospace, US manufacturing has declined in the past eight months. A manufacturing growth rate which was 4.5 percent a year ago, is now down to 0.9 percent.  US too is seeing protests by Detroit teachers and workers.

Both China and US stocks have entered into a bear market. Europe is no better. A series of big companies in Europe are cutting jobs massively, including in electricity generation, airlines, steel and finance.

Worryingly for these elites, a whole lot of working class people are taking to streets and actions. The 2008 financial meltdown actually had helped these elites expand their wealth through mergers, acquisitions and share buy-backs, financed by free cash from world’s central banks. All this at the cost of massive layoffs, wage cuts and suppression of productive forces.

It’s the moment of truth for world’s ruling class. The terror of the oppressed, the workers, is causing dictatorship all over the world, including in France which is in a state of emergency. Same is true of Germany where civil rights are curbed for a “strong state.” In US, government is demanding private companies to give access to its encrypted communications.

The only situation which could be god-send for these billionaires is war. Military adventures secure raw materials, markets and labour without worrying about global competitions. Even nations which abandoned militarism, such as Germany and Japan, are rearming and sending their forces abroad.

So what you are witnessing in Davos is a manifestation of a class struggle. No doubt they would try to pull from under the hat the same rabbit which worked for them during the 2008 global crisis. It won’t be easy this time though.