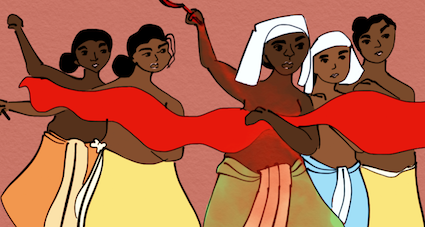 (In the Atharva Forum, an eminent epigraphist S Ramachandran lays threadbare how Protestant missionaries, once the British took roots, plotted mass conversion in South India. In the guise of supporting Channars on the “Upper Cloth Revolt”, they were actually preparing ground to convert them en masse. The transcription, heavily edited to keep focus on this matter itself, is done by Bhumika Arora).

V Ramanathan: We have today a well-reputed epigraphist, Mr S Ramachandran who has been associated with the Tamil Nadu state archaeology department for more than three decades.

Tamil Nadu has always been an apple’s eye for evangelical forces and Christian missionaries who have had their presence in that state for nearly 500 years. They had a very prominent role in creating fault lines and exploiting it as a result we have a fractured society today. Their involvement ranges from a whole spectrum of redefining the society, societal norms, influencing the polity, historical narratives as well as the appropriation and inculturation of the art forms of Tamil Nadu in particular and South India in general.

Ramachandran: Yes, especially the Lutheran missionaries. Protestants captured the educational, academic field. That happened with the connivance of British colonialists. And they were very strategic also, they were very diplomatic in their endeavour because previously the Portuguese who were Catholics, they brutally attacked temples and plundered. So gradually they became very unpopular. So, these Britishers especially when Industrial revolution changed the face of the entire world, they were very calculating, and they had experts.

For example, Robert Caldwell, though he was a Bishop for Society for the Propogation of the Gospel, he was such an expert that his work stands the scrutiny of scholars even today, after nearly 150 years. He was a great linguist, of Dravidian languages, at the same knew how to put the agenda in academic curricula.

So in comparative grammar of Dravidian languages, though his approach is linguistic, he is assuming that the racial theory and linguistic theory are the same. Race and language are the same. He preached that the Brahmins, who were Aryans, had come to India as immigrants or invaders, they colonized, they civilized the local people.

Superficially, it would seem that he is glorifying the Brahmins but that’s not so. He tries to instigate the people by saying that you are all barbarians. The White people have come with modern science and modern education etc.

V Ramanathan: One of the trump cards used by the missionaries, as well as by other Breaking India forces, is that it was Britishers who brought social justice to our divided society. Like people were so oppressed that women of a community were not allowed to wear the upper garment. I am referring to “Upper Cloth Revolt.”

Ramachandran: The very term ‘Upper-Cloth Revolt’ was coined by Missionaries. It’s not the correct term. Originally, the term would have been “struggle or conservation” of the right of wearing the upper cloth. This would’ve been the correct term because from the past itself these ladies are termed as “Channar” or Nadar ladies. They were not permitted by the rulers, especially by the Nairs, the dominant land holders, the rulers of Kerala, they did not allow the downtrodden Channar ladies to wear the upper cloth. This is total lie.

Channar or Nadar ladies belonged to the Chera dynasty or Chera royal house. After the 12th century, that is around 1114CE, the last Cheran became ascetic. He renounced the world. Before giving his daughter’s hand to a Namboodri, he secured the assurance that the offspring would become a Kshatriya. This has been recorded by the historians. This way entire Kerala became a Parshurama Kshetra run at large by Namboodris.

The original people belonging to the Chera lineage, migrated towards the east, Coimbatore district, down south Kanyakumari district. This Kanyakumari district formed part of the Travancore state up to 1956. TheTravancore king and all the military people, they were all Nairs. They were in upward mobility; Chanars were at the receiving end.

When Britishers entered around 1780, Tipu Sultan threatened invasion of Travancore area. The British East India Company assured help to King of Travancore. In 1790s, Tipu invaded Travancore. But his invasion was thwarted. He was beaten and sent back to Shrirangapattna. They put one Resident to govern the area and he was Macaulay. He demanded many dues, disbanded the Nair regiment. Slowly, the Nairs became going down on social scale. Another resident after Macaulay, John Munroe, completely dismantled the Dhruti (endowment) lands. The lands endowed to Brahmins, temples and other sections. The temples were administered by Nairs. It left them badly affected. They had no work to do. Suddenly, John Munroe demanded arrears of some Rs 18 lakhs, all in cash and not in kind.

So these leaseholders, after the harvest, had to sell their agri-product into market and turn it into cash and remit the amount. Now they had no experience in trade and traders were all Channars. So their pent-up anger was directed against the Channars. Channars had become moving up the social scale. Many Channar traders were also growing tobacco in adjoining Tirunelveli districts. It made Nairs sell the paddy at a reduced price and then remit a higher tax to the treasury. So such things were building up.

Simultaneously, religious conversion was also taking place. In one year, the City Magistrate who was some Charles Mead, converted some 3,000 Channars. He did it with open connivance with missionaries. So this pent up anger of Nair was turning into a rage. It erupted in humiliating the Channar ladies in public. They had covered their breasts with a blouse and then upper cloth. Nair ladies were not accustomed to the habit. Whenever they came across any foreigner or Muslim like that, they would cover their breasts, otherwise they would not cover it. In the Nair custom of marriage, there was no mangalsutra; thread was not tied around the bride’s neck. The bridegroom would give a white silk saari to the bride. That’s all. Channars would degrade and mock such a custom: That these Nairs are behaving like herds. That’s why they became severe opponent.

Some of the Channars who became Christian converts, now didn’t need to pay tax in the form of labour. This added to Nair’s anger. It erupted in humiliation of Chanaar ladies by tearing their blouses and humiliating them by removing their upper clothes.

It is clear it was not a “Upper Cloth Revolt”. It was a struggle for the preservation of the right to wear the upper cloth, that’s all!

It was a clash of consciousness and there were many points, many socio-economical problems, pent-up anger, anger which could not be directed against the government because they had the fear that the punishment will be very severe. So their anger was directed towards the weaker section of ladies, particularly Chanaar ladies.

After slavery was abolished in 1845, the London Missionary society, they transported many people as indentured labourers. Even Mahatma Gandhi, he fought in the legal field also, he fought against this – terming these indentured labourers as not belonging to a family, because only when the marriage is solemnized in the Church, it would be considered as a family, an inheritance would be allowed only then. Otherwise, a child born to such a couple, he would become an indentured labourer. So this injustice, Gandhi was particular about opposing it through organizing protests and you know they are all involved in this protest march and they were herded into a prison in unhygienic conditions. They died pathetically. This London Missionary society was very active in slave trade. Even after slavery was abolished this same London Missionary society who preached that they were concerned about all such downtrodden people, they were concerned about social justice, they blabbered like anything but they were the main culprits in indulging in slave trade. After they abolished the slave trade, they were the exporters of indentured labourers to South Africa.